Pray for Peace in Israel Palestine 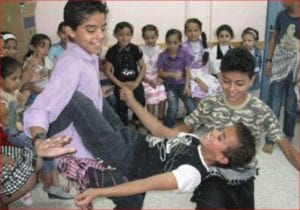 Helping young people cope with living amidst conflict and the effects of the blockade in Gaza, is one of the priorities for the Department of Service to Palestinian Refugees (DSPR). Rough estimates are that 75% of Gaza’s population are under 25 years, crammed into one of the most densely populated regions on earth.  DSPR says that there has been a terrifying growth in psychological problems arising from the stressful conditions, including children who have lost family members.  In response they operate psychological services, including running training courses for those providing assistance.   Recreational opportunities for young people are just one means of helping this community with some relief and the life skills they need behind the blockade.

The World Council of Churches is inviting churches and individuals to join in a week of prayer and action for peace in Israel and Palestine from 28 May to 3 June.  Jerusalem churches are inviting participants to join with them in a prayer they have written for the week.  They are promoting the week for education and advocacy in the search for peace for all peoples and an end to the occupation.  CWS  encourages prayer, and asks for continued support for the work of DSPR.

CWS Clears Old Office
After 15 months, CWS is pleased to report that the insurance company has arranged for all property to be removed from the Manchester Street office.  The building and its contents are in good condition but are covered in a layer of dust.   Vital records have been recovered  as well as office equipment.  The challenge will be to fit the sorted contents into a smaller space.

Pakistan: Lessons learned
CWS recently received the independent review on the ACT Alliance response to the record 2010 flooding in Pakistan that affected 18 million people.  While the death toll was low, damage was extensive and operating conditions difficult.  The widespread destruction of roads, threat of terrorist attacks, bureaucratic delays, and the initial mistrust of nongovernmental agencies by some parts of society proved challenges.

The review found that the overall effectiveness of the programmes was high.  Most communities received initial help within a month – remarkable in an emergency where the world was slow to respond.  However, more assistance could have been given in the recovery period where families needed extra help to get back on their feet.  Two key areas where more work needs to be done are on gender and disaster risk reduction.

In reporting back the reviewers noted that farmers have not been able to replenish herds, communities have lost local shops and services.  The impact on local and household economies has been huge.

ACT Alliance members provided assistance to around 100,000 families.  CWS is grateful to church and the Ministry of Foreign Affairs support which enabled $242,707.05 to be contributed to the appeal totalling more than US$14 million.

Sahel: More help needed
Parts of the Sahel (West Africa)  continue to languish as food prices rise and increasing numbers of people are displaced by conflict.  In May the UNHCR reported that 158,665 Malians had sought refuge  from conflict putting further pressure on food hungry Niger, Burkina Faso and Mauritania. ACT Alliance members are  providing food and other emergency assistance to tens of thousands of families as well as helping others supply their own needs through the drought. Support the CWS Appeal.

Sporting Chance for Workers
Preparations for the 2012 Olympic Games are well underway.  Not so obvious are the men and women who manufacture the clothing and footwear worn by athletes.  The majority are made in places like Sri Lanka’s Export Processing Zone  where CWS partner, the Women’s Centre is based.  The London Olympics include clear commitments to embed sustainability and ethical values.  Play Fair has released a new report, Fair Games? from research in China, the Philippines and Sri Lanka.  Workers interviewed reported wages of between 22-55% of the living wage, high levels of stress, bans on unions, long hours and poor working condition.  Play Fair is asking for support in pressuring brands like Adidas and Nike to respect the human rights of workers.

UN to set new Development Targets
Concern is mounting among many NGOs involved in negotiations for the United Nations Conference on Sustainable Development,  due to begin on 20 June in Brazil.  Although deliberations have a green focus, key human rights are in danger of being ignored.  In response to concerns raised by CWS on the government’s negotiations on safe drinking water and sanitation which was internationally seen as not upholding the right to water, the Minister of Foreign Affairs said that New Zealand intended ‘to direct the outcome statement to support practical measures for improvement.’