Office Closure
The CWS national office will close at 12 noon on Friday 23 December and reopen at  9am on Wednesday 4 January 2012.  In the event of a humanitarian emergency CWS will provide information about our response on the website. 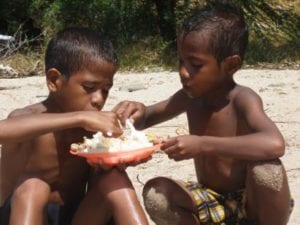 Sharing food on one of Timor Leste’s beaches is one of the fun activities organised for children living in the orphanage run by the Dominican Sisters, a CWS partner.  It is one of the many grants made possible by the Christmas Appeal.  The children range from six to 17 but many are not technically orphans.  CWS helped fund the new Hera training centre at the programme’s farm which is providing vital agricultural training for about 60 young people.  Together they provide much of the food the orphanage needs, and the training will prepare them for a future where the food supply is uncertain.  Supporting the Christmas Appeal sets young people up with the skills they will need for a life time.

Floodwaters Sweep Mindanao, Philippines
Tropical Storm Sendong swept across a huge area in the south, killing 400 people and leaving many missing.  Ramani Leathard from ACT Alliance member, Christian Aid reported, “Today, the country awoke to the tragic sight of washed-out houses, piled-up vehicles and debris and scores of bodies floating in rivers. This is a very serious situation, with hundreds of people already known to have lost their lives and many more missing. Thousands are also stranded on the roads, some of which are impassable due to flooding and landslides. Phone lines and electricity have been cut off in two of the worst affected cities, Iligan and Cagayan de Oro, which are on the north-west coast of Mindanao island.”  CWS is assessing if help is needed.

Climate Justice Delayed
The UN Climate Conference held in Durban concluded a day late on 11 December 2011.  It agreed to start negotiations on an extension to the Kyoto Protocol in 2015 to implement a legally binding agreement to cut emissions in 2020. Kyoto has been ratified by 191 countries – only the USA stayed outside of it.

The decision to delay action is expected to pave the way for a possible 4 degree Celsius global increase (likely to be 7 – 8 degrees in Africa), causing more catastrophic flooding, deadly storms, vicious droughts and increasing levels of hunger and disease.  Negotiations over the future agreement will be fraught – already Canada has notified its intention to leave the Protocol rather than submit to international disciplines.

Secretary General of ACT Alliance, John Nduna, said that while governments are relieved the climate summit in Durban delivered at least some sort of agreement, “the poor and vulnerable will weep at its content. The agreement is too careful and vague to stave off the worst impacts of climate change in sufficient time.  While the Durban outcome left much to be desired, the clear success of this COP (Conference of Parties) has been to mobilize the Green Climate Fund, a new tool to channel climate finance to developing countries. Nduna explained that the Fund “is of huge importance for the adaptation, disaster risk reduction and support work needed at the grassroots level. However, a fund without money will not be able to deliver. Governments must urgently agree on how to mobilise the necessary funds.’

Aid More Effective?
ACT Alliance commenting on the outcome of November’s negotiations in Busan, Korea, noted the mixed results of the new global partnership on aid effectiveness.  Suzanne Matale, Secretary General of Christian Council of Churches in Zambia, is hesitant about its value, “I am not sure that poor people in my country will benefit from the Busan Conference.”

Participating in the large network of civil society organisations, ACT members present noted that China has taken a cautious step forward by joining the global partnership but is not ready for ‘transparent and accountable cooperation’.  Despite ACT Alliance’s slight disappointment – a priority is now to ensure that in the post-Busan period all development partners live up to the agreed common goals and shared principles for effective development.

More Palestinians Moved
Christian Aid and others have released a new statement  about the increasing number of unlawful demolitions in the West Bank including East Jerusalem over the past year.  According to UN figures, a record number of Palestinian families have been displaced from their homes, more than double those in 2010.   Plans for 4,000 new housing units have been approved, the highest since 2006.  The group is calling on the Middle East Quartet to respect Palestinian human rights. 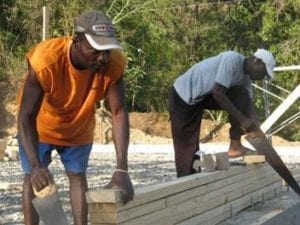 January 12 marks the second anniversary of Haiti’s devastating earthquake.  Two years later the country is slowly recovering, but is in need of more support.  A new 7 room school an hour west of the capital made of earthquake rubble and technology to withstand earthquakes and hurricanes is one of the signs of hope.  In a region that lost 65% of schools, this school equipped with solar panels and bio latrines marks significant progress for people anxious for their future. (photo credit: ACT Alliance)

PCC supports West Papua
The acting General Secretary Reverend Francois Pihaatae in supporting West Papua’s independence said, “The Pacific Conference of Churches is committed to the decolonisation of the Pacific region. We stand beside people under colonial rule and walk with them in their journey towards a future of their own choosing. It is unacceptable that in this day and age we continue to accept the existence of colonies in the Pacific region.”  Rev. Francois is calling on church members in the Pacific to join hands and pray about the situation in West Papua.

The coalition is also raising concerns about the loss of the Disarmament and Arms Control portfolio in the current government line up.

No WTO for Vanuatu
Pastor Allan Nafuki of the Vanuatu Council of Churches is in Geneva campaigning against joining the World Trade Organisation while the government is seeking membership, saying the ‘people don’t even know what the WTO is.”

Christmas Greetings
Throughout this challenging year of earthquakes, funding changes and the many other crises that have rocked people in many parts of the world, Christian World Service has valued the support of those who have worked alongside us.  Thank you.
We wish you a gentle Christmas where the ground is still and the care for each other is strong.  May 2012 bring new energy and inspiration as we work together to end hunger and injustice.
With warm greetings from all the staff of CWS.