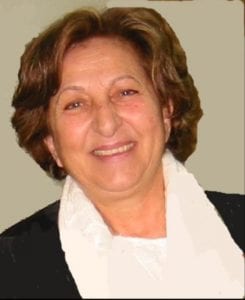 Claudette Habesch from Caritas Jerusalem and on the board of CWS partner, the Department of Service to Palestinian Refugees is touring the country until 11 March as a guest of Caritas.

Fiji: More help needed
Fiji partner, ECREA (the Ecumenical Centre for Research, Education and Advocacy) is working with the People’s Community Network to help 4,500 people living in the informal or squatter settlements recover after last month’s floods in the Western Division.  Dealing with the aftermath of the floods and the loss of livelihood is putting a strain on local resources.  CWS has pledged $5,000 to help provide water, soap, tinned food, stationery for children beginning school, water tanks and tarpaulins.  Will you support this appeal?  Further information and a leaflet can be downloaded.

Hunger lurks in Sahel and Help for Syria
Reports coming from Africa’s Sahel region indicate 12 million people are facing a deepening food crisis after widespread drought.  The governments of Burkina Faso, Chad, Mali, Mauritania and Niger have declared states of emergencies and called for international assistance before things worsen.

Good rains, a double-sized harvest and international aid has enabled the UN to declare the famine in Somalia is over.  However the situation remains fragile as over 2 million people are still vulnerable to malnutrition.

The ACT Alliance is also appealing for assistance for North Sudanese fleeing from fighting on the southern border in south Kordofan and the Nuba mountains.  Refugees are also arriving in the Kakuma camp in north-western Kenya from fighting between the Nuer and the Murle in Jonglei, part of the new Republic of South Sudan.

On going violence in Syria is of great concern.  ACT Alliance members are assessing the needs of those displaced and providing some assistance. 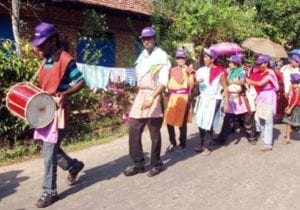 The Women’s Centre, working in Sri Lanka’s free trade zones, celebrates the International Day of Women on March 8 with great enthusiasm.  Last year 600 people took part at Katunayake led by their own street drama troupe.  Women spoke of the problems facing them in the free trade zones, while others talked of the plight of Tamil women in Batticaloa after the end of the war in the east, and of Muslim women.

The Centre organised other activities to enable the women to deal with some of the issues they faced, including challenging changes to the Pensions Act, and pressing for a pay increase (workers received none even though the President had promised one when he was elected in 2009).  In 2011 workshops, drama troupes, a worker oriented newspaper, health and dressmaking training offered opportunities and information to the women.  The Centre also undertakes research on human rights matters, runs a Day Care Centre, and campaigns against violence against women.  For many often vulnerable women, these services offer strength and hope.
“Today we got the opportunity to talk about very important matters.  We have been confined to our jobs.  As a result our mental tension has increased.  This discussion gave us a good strength so we can face the realities of life.” Anoma at a workshop on mental stress.

Christchurch Remembers
One year on from the earthquake that devastated Christchurch and forced CWS out of its main office, we remembered.  Our thoughts and prayers are with those families and friends who lost loved ones or were injured on February 22. 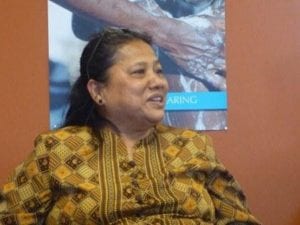 We are discovering for ourselves how long it takes to recover from disaster and are mindful of others facing similar challenges throughout the world.  CWS welcomed “Living Letters” from the Christian Conference of Asia, the Rev Dr Henriette Hutabarat Lebang (General Secretary pictured) and Rev Dr Tara Curlewis (National Council of Churches Australia) when they visited the new office.

Reflecting on Lent
Dr Bernard Sabella from CWS partner, the Department of Service to Palestinian Refugees writes, “Because God’s work in history is one of loving initiative and because men and women are all created in His image, Lent by necessity is a season in which I would want to revisit the love of others and to see in each and every one of the people who inhabit Palestine and Israel my brother and my sister born in the image of God.”

Seven Weeks for Water
The World Council of Churches invites Christians to take an urgent look at “The economy of water” through the weeks of Lent. The Seven Weeks for Water will pay special attention to the emerging and controversial “Green Economy” concept. The Green Economy aims at reconciling economic development with environmental and social well-being.
Weekly reflections and resources are available.

Share Your Blessings
CWS focuses on sharing our blessings in new Harvest Worship resources.  In Nicaragua families can enjoy the good life with your support because of their new gardens.
“There was nothing when we came here.  There were no trees. Now we have so much variety and it has been a blessing for everyone.” Martha Mendoza, Beneficiary of CEPAD’s Patio Project.