1 March  Fast for the Climate — join the interfaith initiative.

6 March World Day of Prayer in a church near you.

It’s never too late to give to the 2014 Christmas Appeal. 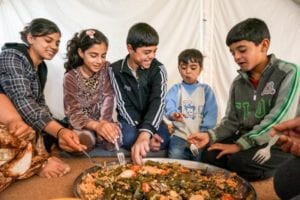 Yezidi children in northern Iraq have new winter clothes and food to share in the tent that is now home.  Photo: LWF/Sandra Cox

Iraq: Clothes and Food to Share
Keeping warm through the winter period has been impossible for many Iraqis who fled fighting in their home territories.  ACT Alliance along with others is distributing food, warm clothing, heating, bedding as well as installing water and sanitation systems and providing some psychosocial support.  The UN reports 740,000 people are sheltering in unfinished and substandard buildings without electricity, water and in some cases roofs.  A similar number have found shelter in its 25 tent camps, churches, schools or other places of refuge.  The situation is expected to continue.  Please support the Iraq Crisis Appeal.

Double Aid to Iraq and Syria
Citing the large numbers and dire living conditions of displaced people in and from Syria and Iraq, CWS appealed for more relief.  “What is needed is more funding to help local churches and other non-governmental agencies get on with the immense job of providing the basic necessities to people who have fled homes with only the clothes they are wearing,” says Pauline McKay.   The NZ government has so far committed $14.5 million, 83 cents per displaced person.  According to the UN 12.2 million Syrians and 5.2 million Iraqis are in need of humanitarian assistance.  UN agencies have received less than half the funding needed.  Pauline signed the Open Letter on Military Deployment in Iraq.  Please write to MPs urging them to increase humanitarian assistance.  CWS would be interested to read responses.

Uganda: Water tanks needed
Tragically, Charles Rwabambari of the Centre for Community Solidarity reported a 12 year old HIV/AIDS orphan was killed by a crocodile last week.  Kiiza had gone with his sister to fetch water from the River Kagera for their grandmother with whom they now live.  He did not hear his sister’s warning shouts while waiting for the jerry can to fill.  CCS is thankful for funding that enabled them to build 690 rainwater tanks so children did not have to collect water. Please consider buying Water through Gifted this Lent.

Ebola and Debt
The Council of Churches in Sierra Leone credits local community response as a key mechanism in stopping the spread of the virus.  General Secretary Ebun James-DeKam observed that there were no deaths in communities where the Chief encouraged good practice: hand washing,  safe burials, and teams monitoring traffic in and out of communities.  Over  3,000 people have died from Ebola in Sierra Leone, but numbers of infections are falling.

In January debt campaigners welcomed an IMF offer of US$170 million in debt relief for Guinea, Liberia and Sierra Leone.  New loans will mean they will pay more in coming years. In 2013 the three countries paid $81 million in debt service and in 2012 Guinea spent more on debt than public health.  The World Bank has made no announcements and campaigners point to the need to rechannel debt payment into lifesaving health services. 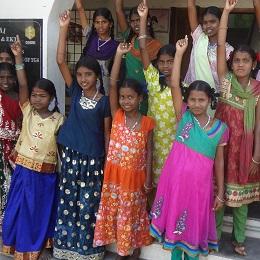 For the third year, EKTA and supporters in Madurai, South India rallied as part of the One Billion Rising movement to stop violence against women and girls.  The district collector, senior police officers, a mental health researcher and NGOs spoke of a woman’s rights to dignity and safety on February 14, V-Day.  The ‘rising’ culminated in dance and the releasing of balloons.

The international community is preparing for the first UN summit to improve global humanitarian efforts.  ACT Alliance is advocating a bottom-up response that shifts power and accountability to local communities, investment in local resilience and more help for fragile states and protracted crises.

Sri Lanka: Political Changes
Monlar welcomed the election of President Sirisena last month, noting defeated President Rajapaksa  undermined democratic processes and increased ethnic tensions.  They are hoping for economic relief for the poor communities with whom they work.  Meanwhile the UN Commissioner for Human Rights deferred the long awaited report on human rights violations and war crimes in the last weeks of the 2009 war until September.

Climate Talks Continue
ACT Alliance attended UN talks February 8-13 in Geneva. The meeting agreed on the draft negotiating text.  General Secretary John Nduna recognises the importance of a strong agreement and says countries need to “speed up their national climate contributions” to make sure they are “equitable, fair and ambitious.”

Easter Egg Hunt
As a member of Fairtrade Australia and New Zealand, CWS is preparing an Easter Egg hunt that focuses on fairtrade chocolate, chickens for Palestinians and the Easter story.  For more information contact David at (09) 571 9150.

Palestine: Action for Peace
The ACT Palestine Forum invites you to join them in a prayer vigil for the Middle East on the 24th of each month.  In January an independent medical fact finding mission produced the report No Safe Place calling for investigations into human rights violations during the Gaza offensive last year.