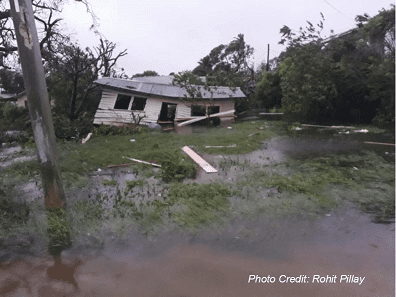 Tonga: Help is at Hand

On the night of 12 February, Tropical Cyclone Gita passed over Tonga.  With winds topping 200km/hour, 78,000 people on the islands of Tongatapu and ‘Eua were affected.  A few people remain in shelters.  The Tonga National Emergency Management Office reports on damage to 85 schools, 70-80% of fruit trees, 40-50% of root crops and approximately 40% of fishing vessels.  Local crews are working hard to clean up and families are salvaging what they can.  Power has been restored to ‘Eua.

CWS launched an appeal to replace or repair water and food supplies.  Funds will restore destroyed gardens, repair rainwater systems including roofs and meet other needs identified by our partner the Tonga Community Development Trust on both islands.  CWS is supporting the ACT Alliance appeal working with the Tongan National Council of Churches to make sure the most vulnerable get the help they need.  We are grateful for the generous donations so far.  More help is needed.  Please support the Cyclone Gita Appeal.

UN agencies warn two-thirds of South Sudanese will need food aid in what they see as the toughest year on record.  The South Sudan Council of Churches is working to end this devastating 4 year conflict.  The NZ Government will match donations for South Sudan. 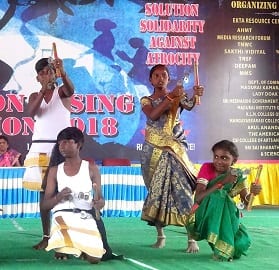 For the sixth year on February 14, CWS partners EKTA and Women Development Resource Centre participated in One Billion Rising, a global campaign to end violence against women and girls.  A gathering of mostly women including Dalit, Tribal, school and college students shared cultural dances and skits, and listened to speeches.  The assistant commissioner of police launched balloons as part of the occasion.  “The idea is to begin a conversation about different types of violence,” says Bimla Chandrasekar, director of EKTA which works to promote gender justice across all ages.

Concerns are mounting for the more than 688,000 Rohingya refugees sheltering in Bangladesh with no resolution in sight.  In March monsoons are expected to threaten homes and gardens built on the steep slopes.  The refugees are struggling to deal with diphtheria, the lack of protection and the shortage of resources.  Refugees will not return to Myanmar.  Donations can be made to help the refugees through the Rohingya Appeal.

A three-person pastoral team from the Christian Conference of Asia heard stories of grave human rights violations and repression against indigenous West Papuans.  They were asked to press Indonesia to stop human rights abuses and respect their rights of self-determination in an all-inclusive dialogue between Papuans and the government.

Pauline McKay reports adaptation was firmly on the agenda at a 3 day conference as Pacific nations faced it every day.  Atmospheric scientist Michael Mann gave a key address in Wellington along with Samoan PM Tuilaepa.

Nations begin negotiations on two compacts on refugees and migration this month. In January, ACT Alliance and other faith-based organisations hosted a symposium to identify key issues for inclusion using a human rights framework.  General Secretary Rudelmar Bueno de Faria said migration has always been a feature of human history.  “What needs fixing is the continued violation of the human rights of migrants,” he added.  More than 40 million people are displaced within their own countries and are unlikely to participate in negotiations. UNHCR has released the Zero draft on the compact for refugees which is under consideration by UN members.

CWS welcomes Tara Tautari from the Methodist Church to the CWS Board.  She has many years of community development and ecumenical experience at the World Council of Churches, and now manages the Whangarei electorate office of Winston Peters and Shane Jones.

Plan to help Syrian and Palestinian refugees in this year’s Operation Refugee — June 16–20.