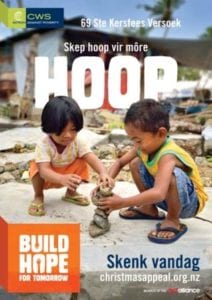 1 February  Fast for the Climate — join the interfaith initiative.

14 February  One Billion Rising events to end violence against women.

It’s never too late to give to the 2014 Christmas Appeal. 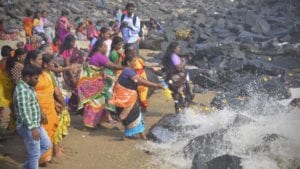 After reciting prayers, locals sprinkled flowers and poured milk into the sea as they remembered loved ones and friends lost.  Photo: Neythal

Tsunami Survivors Remember
Ten years on memories of December 26, 2004 remain very real for coastal dwellers in South India.  In the Nagapattinam district the tsunami claimed the lives of 6,065 people.  Many fisherfolk once dependent on the sea now eke out a living far from the coast.  Valli, who lost her daughter in the wave, can not bear to go to the beach so sells dry fish further inland.  She is scared of the water and plagued by recurrent nightmares.

In ten years coastal life has been transformed – climate change and rising sea levels are causing extensive erosion.  Government regulations limiting housing to 200 metres above the high tide mark have forced people inland.  “The tsunami has enabled the state in the name of safety to derecognise or deny the traditional rights of the communities over their home and coastal resources.  They have become refugees in their own land,” says Gandimathi of CWS partner Neythal.  Like  Sneha, its sister organisation, Neythal is a fearless advocate for fisherfolk.  They are mounting legal challenges to protect the people who have lived on the coast for centuries and helping them set up small businesses to support their families.  As important are campaigns to stop growing levels of violence and discrimination against women and to protect girl children.

South Asian Tsunami: Wave of Change
Important lessons were learned from the tsunami response. Disaster Preparedness is an integral part of much good development work.  The UN, governments and NGOs operate in cluster systems to coordinate service delivery.  There is greater recognition of the role of local efforts—NGOs like Sneha and Neythal were the first responders.  Being accountable to people affected by the disaster is a new development. 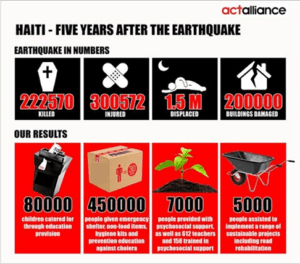 Haiti: Resilience to the Fore
In 2010 a 7.0 tremor lasting 35 seconds left1.5 million people homeless, destroyed schools and hospitals, and killed an estimated 220,000 people.  Five years after the January 12 quake, 85,000 people are living in tents, 8,500 people have died in a cholera epidemic linked to UN peacekeepers and the parliament was dissolved this week.  ACT Alliance members and CWS partner ICKL have helped build new homes and schools, and find ways for people to make a living.  Interested?  Support the Haiti School Appeal to help ICKL in its work.

Israel:  Future of Palestinians
The Department of Service to Palestinian Refugees reported on the “Israel and the Nation State of the Jewish People Bill” which has been  approved by the Israel’s cabinet and will go to the Knesset.  By codifying Israel as a Jewish state for Jewish people, the bill will further remove the rights of its Arab citizens including collective rights and“…effectively end any hope of the Right of Return for Palestinian Refugees.”   Christian Aid joined others to welcome Palestine’s move to join the International Criminal Court.  The ratification of the Rome Statute will help deter war crimes and end impunity in the region.

Ebola More than Health Issue
The numbers of people infected with Ebola appear to be in decline thanks to sustained efforts to control its spread.  The stigma attached to infection remains strong and it is important to maintain food and other supplies to families in quarantine.  Please help by supporting the Ebola Response Appeal. 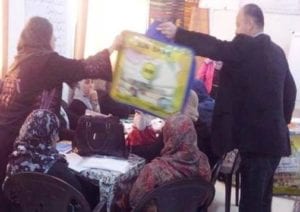 Heavy winter snow has collapsed tents for some Syrian  refugees, adding to their difficulties. In Jordan DSPR distributed blankets and food parcels to 819 families before Christmas. After the latest study found two-thirds of refugees living below Jordan’s poverty line and almost half with no heating, UNHCR has called for more help.  With 12 million Syrians needing assistance, such support is urgent.  Please support the Syria Appeal and pray for a political solution.

WCC responds to Violence
The World Council of Churches condemned the fatal attack against the satirical paper Charlie Hebdo as “an attack on human life, human dignity and the human rights of all.”  It also expressed shock at the attack initiated by Boko Haram that killed more than 2,000 Nigerians.

Sri Lanka Elections
In January Maithrepala Sirisena was elected president in a last minute surprise candidacy that will hopefully lead to improved relations between Tamil and Sinhala populations, an investigation into alleged war crimes, and end corruption and violence.  Hs predecessor was condemned for political killings, nepotism and interference in the judiciary.

Arms Trade Treaty
On December 24 the new international law regulating the global trade in armaments and ammunition came into effect.

Share your Blessings
Giving thanks for the Harvest and giving alms during Lent are traditional observances in the Christian year.  You might like to share your blessings with people who need food, clothing and shelter by making a donationto CWS.

What did you think?
We want to make the Christmas Appeal better for this year’s 70th appeal.  Please let us know what you found useful and what could be  improved in the supporting material.  Thanks