Something for Fathers
Get in early and order your father a load of cement or new chickens for Father’s Day on 2 September.  Choose from the Gifted range to support CWS partners working to care for poor families.

Nicaragua: Growing for Plenty
Patio or home garden programmes are a proven way of helping poor people eat better, save money and build a better future in marginal rural communities.  When food prices can be highly volatile such support gives some security for families living close to hunger.  Training and resourcing people to pass skills on is a strategy used by many CWS partners.  Gardening is a key component of Council of Protestant Churches’ (CEPAD) work in 43 rural communities in Nicaragua, Central America. 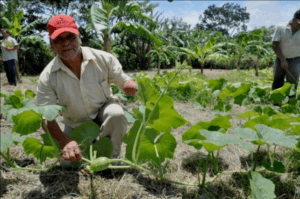 CEPAD builds strong relationships within communities knowing that this is the best way for people to help themselves now and in case of disaster.  Two community leaders are trained in organic methods so that they can establish model gardens focusing on managing a limited water supply, soil conservation and the introduction of new crops.  The trainers are each given seeds, plants and tools to share with five new farmers.  The process brings the new farmers together regularly to share their experiences and learn from each other.

CEPAD reported that 516 packs had been distributed to new farmers in the last year.  Other programmes help communities get roads repaired or improve access to services by training them with the necessary advocacy skills to get government or other support.  In a country hit frequently by weather disasters, they have provided food and other necessities to thousands of Nicaraguans hit by tropical storms over the year.  Thanks to programmes like this and new government initiatives the FAO (Food and Agriculture Organisation) reports that malnutrition has reduced from 52% to 19%.

Rio + 20: What next?
The landmark UN meeting on Sustainable Development held last month in Brazil disappointed many.  ACT Alliance said governments had ’squandered a once-in–a-lifetime opportunity to make significant advances towards a greener, fairer future for the planet and its people’.  The People’s Summit was a vibrant sharing space for those determined to create the sustainable future that governments were less committed to supporting.  Discussion about possible Sustainable Development Goals to succeed the 2015 Millennium Development Goals continues.

Africa: Recovery Slow in Horn
A year after the worst drought in 60 years hit East Africa, ACT Alliance members continue working with some of the 12.4 million people affected.  After decent rains some areas are well on the way to rebuilding livelihoods.  Other regions lost crops from flooding after heavy rains while in northern Kenya and southern Ethiopia farmers are worried by lower than average rainfall.  The UN reported that 2.51 million Somalis are still in need of food aid.  Agencies running the five Dadaab refugee camps in north-eastern Kenya have appealed for more funding  as they find it hard to meet the basic needs of the 250,000 refugees who have arrived in the last year, primarily from Somalia.  They cannot afford to operate schools in two camps or provide more permanent housing.  Support the CWS Appeal.

South Sudan at One
July 9, 2012 marked the first anniversary of independence for South Sudan.  It faces numerous challenges with the return of 400,000 migrants from Sudan plus 175,000 refugees from continuing violence in Blue Nile and South Kordofan states.  Independence has left the country with weak services and infrastructure.  Revenue from oil which provided up to 98% of the government budget ceased when the country halted production in response to continued disputes with Sudan who control the only oil pipeline.  Inflation hit 80% and the UN reports that nearly half the country’s 9.7 million people are food insecure.

With development plans largely on hold, the work of CWS partner, the Maridi Service Agency is a vital sign of hope.  Some of the funds raised for the Sahel Food Crisis Appeal are also assisting those made hungry by drought, failed crops and the lack of development in the east Sahel.

Live Below the Line

It was not easy but last year Devashini Devanandan (pictured at the 2012 Auckland launch with Boris) spent $11.25 on food for five days in order to raise funds for youth-focused Maridi Service Agency in South Sudan.  She is one of the ambassadors for this year’s challenge running from 24-28 September. It is an opportunity to think about food and sign up sponsors for a youth-inspired action to end poverty.  Contact Lara for more information.

Spotlight on Cooperatives
Each month the New Internationalist magazine brings together perspectives from around the globe.  The July issue examines cooperatives.

UN reports on the MDGs
In publishing this year’s report on the Millennium Development Goals, the UN notes that for the first time the number of people living in poverty has fallen and over 2 billion more people have access to safe water.  In response a group of independent UN appointed experts stated that there is no room for complacency in efforts to meet anti-poverty targets by 2015.  There are still too many people living in extreme poverty and they urge governments to strengthen their efforts for an equitable and sustainable world.
South Africa in Focus
Happy Birthday to 94 year old Nelson Mandela on July 18.

A NZ perspective on local efforts to abolish apartheid in South Africa will be the focus of an ANC centenary conference, 18-19 August in Wellington.  Further information.

Peace Sunday
Peace in the Pacific is the focus of new worship resources, “Making every effort to maintain the unity of the Spirit in the bond of peace”.  Available now.