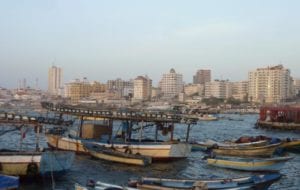 CWS’s Trish Murray enjoyed an evening at Gaza’s port in May. Wafa Kanaan, medical director of DSPR Gaza wrote to her, “You will not believe this is the same place you visited two months ago.”

6-10 October Live Below the Line

Gaza: “We are living a Disaster”

CWS partner the Department of Service to Palestinian Refugees (DSPR) reports on the worsening situation.  Wafa writes, “Bombs are everywhere in Gaza with no stop.  We are really living a disaster here.  I cannot sleep well at all since the first day till now, feeling scared all the time.  I am thinking of my 11 month old baby girl and how to protect her while I am hearing and watching everyday stories of fathers and mothers who were not able to protect their children.” On July 23 the UN reports 697 people have been killed and 140,000 displaced.

Underlying the current situation is the failure by all involved to reach a just, political situation and end the blockade.  Dr Bernard Sabella writes, “Most important… is the need to convince the Israelis, especially the politicians, that the only way out is through making PEACE with us Palestinians.”

CWS called for an immediate ceasefire.  A letter written to the government welcomed support for a ceasefire and $250,000 contribution to UNRWA, but asking for a meeting with the Israeli ambassador.  You may also like to write to HE Mr Livne, PO Box 25485, Wellington 6146. Please continue to pray for all involved.  CWS has launched an appeal for DSPR’s relief efforts in Gaza.

Peace Sunday Resources
Peace Sunday is held on the Sunday closest to Hiroshima Day, 6 August.  This year CWS is also remembering the 100th anniversary of Britain’s declaration of war on Germany on 4 August, which included New Zealand. “And the Hour is Now Late” Worship Resources will link World War I, the bombing of Hiroshima, and the people of the Middle East as a focus for prayer and action.

Philippines: NCCP report
The cameras have gone but the recovery after November’s typhoon continues.  The National Council of Churches has provided food relief for 23,087 families in Eastern and Western Visayas.  They have distributed hygiene and kitchen kits, and bedding to 8,345 households.  In March they began building 613 homes in Savacion, Sawa and Serum.  Vegetable and corn seeds have been distributed to 1,034 families in Samar and Iloilo.  They have distributed nets and gear to 87 families and will donate a further 50 fishing boats. With the help of ACT Alliance members 19 participants received Community Based Psychosocial Help training in two areas of Samar.  Baseline data has been collected and outreach begun.

Filipino Bong Dalisay reflects on five days volunteering that lasted six months.  “The first time I saw Kuya Tolyts, I knew he was a rock star.”

Japan: Triple Disaster
Church World Service Asia Pacific has submitted its final report on the earthquake, tsunami and nuclear power plant accident in March 2011.  Affected communities face serious on-going challenges, downplayed by the Japanese government.  One priority was to provide shared office and information for those responding to radiation issues.  Advocacy work continues in an effort to improve the outcomes for those affected.

Tonga: In case of disaster
In July Trish Murray and partner Ama Takiloa took part in the final stage of a joint agency programme to help Tonga prepare for natural disaster.  Largely funded by the NZ government and repeated in Fiji and Vanuatu, the latest exercise had Tongan government, police, army, medical personnel, Red Cross, church and community groups testing and improving their procedures for a tsunami or other disaster.

Live Below the Line
This month CWS welcomes Grace Manning who as part of her internship will be developing this year’s Live Below the Line campaign.  This challenge will take place from 6-10 October.  Participants spend $2.25 each day for food and line up sponsors for their efforts.  It is a practical way to show your commitment to end hunger.  This year funds raised will help people needing help in the Philippines.  Contact Grace to find out more. 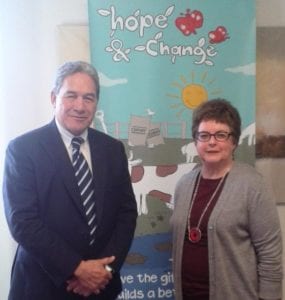 Pauline McKay is meeting with interested MPs to discuss the need to increase the government aid vote (Official Development Assistance) from its current 0.26% of Gross National Income, well short of New Zealand’s international commitment of 0.7%.  She is also discussing progress on the United Nations new Sustainable Development Goals to be adopted later this year.  CWS encourages people to raise the low aid levels with candidates. August’s Update will carry more information and party policy on aid-related matters.

Wellington Musicathon
Two Wellington congregations are raising funds to ensure Palestinians have more water on the West Bank.  From 10am Saturday 9 August to 10am Sunday 10 August, St John’s in the City will host beautiful music to raise funds for CWS.  Jointly organised with St Andrew’s on the Terrace, they are now seeking sponsors and a large audience.  Find out more from St John’s.

Fair Trade Baking Competition
CWS is supporting this year’s Big Fair Bake organised by Fairtrade ANZ of which CWS is a member and Trade Aid.  The competition is open from 1 –17 August for recipes with at least two fair trade ingredients.  You send the recipe, a photo of you and your baking and say why you baked fair.  There are great prizes to be won.  Find some recipes here.