17—24 September World Week of Peace in Palestine and Israel 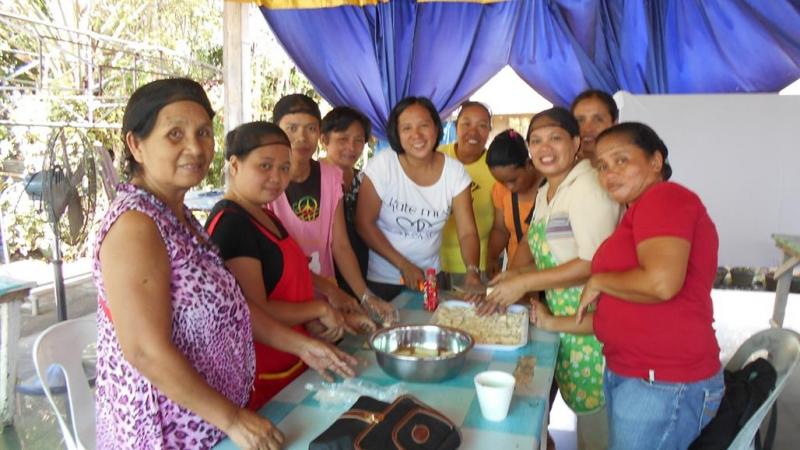 Filipinas learn how to make new products from the bananas they grow. Photo: Developers

Typhoon Haiyan in 2013 was a major turning point for Filipinos living in Aklan province where CWS partner Developers is based. Part of the community, Developers has shown how important local partners are in the recovery. Donations to the typhoon appeal and the Special Project of Methodist and Presbyterian women have funded their work. CWS also gave money to the National Council of Churches for relief supplies.

Nearly three years later, Developers has reported on the second phase of their recovery plan. In the first phase, they used your donations to provide corrugated iron roofing for 3,061 homes— 98% of houses were damaged or destroyed in the super typhoon—and repaired schools. Developers facilitated workshops involving community members of all ages and local government to plan their next steps. Economic recovery, climate mitigation and more disaster preparedness training were their priorities. They asked CWS for funds to replant 12,000 trees and root crops—and members of nearly 1,500 households planted 49,540 – including banana, coconut, cassava and taro. Your donations bought seeds and replaced farming and fishing equipment lost in the storm through a small credit scheme.

Last year Developers organised workshops on disaster planning, economic development and first aid skills in 6 communities. The brand new farmer’s market built and run by the people of Cabanigla is cutting out middlemen and keeping money in the local market. Every Saturday they sell produce and goods they have made. Three fishermen come from the coast to run stalls. The next phase is to replant mangroves. CWS has just sent funds to plant the first hectare. Buying Mangroves is one way to support this work.

The 140 participants in this year’s Operation Refugee have raised $55,404 for Syrian refugees—a tremendous effort. Read the final report.

Thank you for your gifts to Syrian refugees.  In Lebanon, the Department of Service to Palestinian Refugees helped Syrian refugees sheltering in Palestinian camps with emergency cash grants and education programmes.  In Sidon for example, they run classes for 14-18 year olds with Syrian teachers as well as offering extra tuition for students in the United Nations run schools which use French as the language of instruction.  Last year DSPR organised travel, accommodation, visas and exam entry for more than 300 students returning to Damascus to sit their important Brevet and Baccalaureate exams.  In Syria, DSPR supports  a school run by volunteer teachers in badly destroyed Yarmouk camp with books and by organising student entry for exams.

Photo: In Jordan, Syrian mother of 3 is grateful for a box of household supplies from ACT Alliance. ACT/Paul Jeffrey

Nidier left home with her five children seeking food after losing her crops to drought.  CWS is appealing for donations, so ACT Alliance can get relief to some of the 6 million people in need of food.  If you can, please help.

Photo: Nidier and her 5 children left home because they had no food.  She cooks wild leaves in Lol State where she and 5,000 others are receiving help from ACT Alliance.  ACT/Paul Jeffrey

What do you think?

CWS sent $7,000 to partner Monlar to enable local people to respond after May’s heavy monsoon.  The flooding on top of earlier drought affected nearly 700,000 people in the southwest.  Monlar an organization that includes small farmers and agricultural experts will support 300 families with seeds, tools and advice to replant using the eco-agricultural methods they have developed.  They will do further work on disaster preparedness, including with government so farmers cope with changing weather patterns.

The treaty requires states to provide assistance to victims of nuclear weapons use and testing, and requires environmental remediation for areas contaminated by radiation.  Nations can sign on to the treaty from September 20 and it will enter into force after 50 countries have ratified it.  The New Zealand government made the negotiations a high priority. Roland Oldham of Moruroa e Tatou spoke of harm done by nuclear testing. See ICAN for more information.

CWS is supporting the campaign to put climate change action into government legislation.  This month, retiring Commissioner for the Environment Jan Wright supported the proposal.  Last month experts warned the world has three years to take measures to stop the worst affects.

Fatima from Syria tells her story in The War Refused to Leave Us.  From a woman working at home through DSPR she has found new purpose as a volunteer health trainer assisting other refugee women and their families in Jordan.  Please support refugees through our Winter Appeal.  Ask Pam for more copies.