India: Protect our River and Us 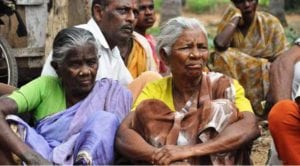 CWS partner, SAND, joined with others on a four day cultural yatra or journey along the Vaigai river in Tamil Nadu, India.  The 250 kilometre river is often dry.  Without resolution of the feeding water issues at state level and better conservation measures, there may soon be no river.  The yatra began by collecting water at the source in a traditional urn and more than 260 people taking an oath to protect the river, the surrounding land and to demand special support for the rights of Dalits, tribal people, fisherfolk and farmers.

Along the length of the river, the yatra members encouraged local people to protect the river on which they depend.  They used street theatre to capture the attention of locals like the women above.  In return the villagers shared stories and their experiences.  In the village of Antiparty locals spoke of the lack of drinking water because of shrinking ground water levels.  In Mettupatti illegal sand mining is causing severe damage including to the local sacred centre popular with tourists.  The loss of irrigation means that Anaipatti residences can harvest only one crop of rice in a year when they used to grow three.  A paper mill has ruined 938 acres of former farmland, while in its lower reaches farmers have no water at all for irrigation and little drinking water.

Dance and drama performances combining traditional stories and conservation practices were warmly received by school children and those whose livelihoods have been affected by changes in the river.  On the final day the yatra was enthusiastically welcomed by fisherfolk at Attangarai and the urn full of river water marched to the sea by the whole community.

CWS office update
Last month CWS archives were successfully removed from the Manchester Street office and are now in temporary storage awaiting sorting.  The final retrieval of all material from the office itself was thwarted by procedural matters on the last day.  CWS is once again negotiating for its removal.

Brazil: Urgency at Rio + 20
Twenty years after the Earth Summit, 50,000 people gathered on June 20 in Rio de Janeiro for the UN Conference on Sustainable Development.  CWS is part of alliances calling for major changes in the global economy for the good of the planet and for people.  Sustainability and food justice are part of ‘The Future We Want’, the name of the final outcome document. CWS wrote a briefing for the government asking for urgent action to help people out of poverty and that we live within the capacity of the planet. Further information and media releases are available. 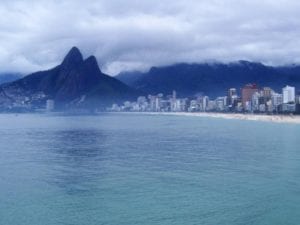 Behind the growing economic influence of Brazil is a story of continued deprivation for the country’s poorest citizens.  Christian Aid has launched The Real Brazil exploring the consequences of inequality.  The 16 million new millionaires have benefitted from structured inequality that has left 40 million people struggling below the World Bank’s poverty line.  The huge gulf separating the haves and have-nots is worse in rural areas.  The Brazilian authors found that 90% of new jobs in the formal sector pay low wages and a worker’s average earnings have not kept pace with growth.  Black Brazilians have less schooling, occupy worse jobs, face fewer options and live in regions with poorer infrastructure.  Instead industrialists are making more money; just as in the rural sector property is concentrating in the hands of landowners.

Debt Malady May Spread
Jubilee UK has launched The State of Debt, drawing attention to the situation in developing countries following the successful global campaign, organised jointly in New Zealand by CWS, to cancel unpayable debt.  From 2000 to 2010, 32 countries qualified for IMF and World Bank debt relief, cutting foreign debt repayments from 20% of government revenue in 1998 to less than 5% in 2010.  Primary school enrolment increased from 63% of children in 2000 to 83% in 2010 for qualifying countries.

With global attention focusing on rich country debt, the report indicates a deeper problem.  Mozambique, Ethiopia and Niger, beneficiaries of debt relief, could be back where they were in the next few years. Drawing attention to declining national earnings, report writer Tim Jones, commented, “We urgently need a global system for regulating the way money moves around the world, to prevent large debts being created between countries, and bring thirty years of destructive debt crises to an end.”

UNHCR: More Refugees
In releasing Global Trends 2011, the UN High Commissioner for Refugees noted that 2011 had been a record year for forced displacement across borders.  The year-end saw 15.2 million refugees, almost three quarters of whom have been stuck in camps or living precariously for more than five years.  Worldwide 42.5 million people are displaced, including 800,000 new refugees.  Noting the worrying trends, High Commissioner, António Guterres, said “2011 saw suffering on an epic scale’.

Direct Partners
Dunedin churches are taking up the challenge to build a relationship with one preferred partner.  Mornington Methodist held a successful community fundraising evening for water tanks in Palestine featuring Colin Gibson’s settings of some of Margaret Mahy’s writings to music (a CD is available for $10).  All Saints Anglican are busy signing up 33 people from their local community to commit $3 a week for a year.   Contact CWS for more information on this new scheme.

Sahel: Very Short of Food
ACT Alliance is stepping up food and other assistance in hunger struck Sahel, now affecting 18.7 million people.  Burkina Faso, Mali and Niger are among the worst affected.  Conflict in Mali has displaced 372,279 people, including 205,022 refugees.  Donate to the CWS Appeal so ACT Alliance can help more people.
About Update
Update provides news, information and stories.  Reproduction of items is encouraged with attribution from CWS.  The current and back issues are available.