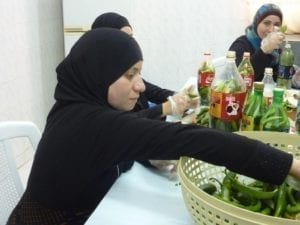 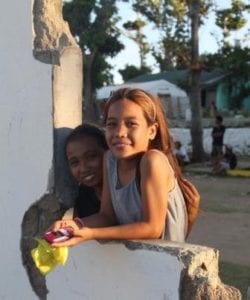 “Since [Typhoon Haiyan] many people have spoken about the resilience of the Filipino people. On one hand, this may be true. On the other hand, this seems to suggest that we can cope with pain, suffering and loss anytime since we are so used to disaster anyway.”    (Photo: ACT/UKarki)

Refugees from Syria are finding a warm welcome from the Department of Service to Palestinian Refugees.  DSPR provides food, children’s winter clothing rent assistance and blankets.  But it’s the life skills and health programmes that are building community among host and refugees that show DSPR’s deep understanding of the situation.  When tensions in Lebanon and Jordan are high, their efforts to organise the refugees to help each other is improving incomes and relationships for many vulnerable people.

Children who cannot go to school queue up for Saturday forums that give them opportunity to play and learn.  Trish Murray on her recent visit was struck by a determined but deeply worried mother.  She put her two sons on a bus to return to Damascus so one could sit the baccalaureate exam.  The older was detained at the border, but the other went back into the warzone.  DSPR had organised a busload to sit the exam and were able to help.  “Your support to the Syria Appeal, makes DSPR’s work possible,” she says.

The United Nations Refugee Agency (UNHCR) reports refugee numbers reached 51.2 million.  High Commissioner António Guterres said, “We are seeing here the immense costs of not ending wars, of failing to resolve or prevent conflict. Peace is today dangerously in deficit. Humanitarians can help as a palliative, but political solutions are vitally needed. Without this, the alarming levels of conflict and the mass suffering that is reflected in these figures will continue.”

According to ACT Alliance’s Mattias Söderberg, the climate talks in Bonn made “some good progress on the different elements of the deal: a consensus that next year’s agreement should have adaptation at heart and the parties are all talking about the need to cut emissions. However, we can’t let up, the hard work must continue.”  Faith leaders are inviting people to fast on the first day of each month until more progress is made.

The hunger gap in South Sudan is growing with the arrival of the rainy season and sporadic fighting makes food delivery very difficult.  ACT Alliance members are doing their best to help more than 1 million displaced people.  It involves talks with both sides to ensure access.  The UN is warning of potential famine.  Meanwhile in Addis Ababa talks have again been suspended.   Wadalla Peter of CWS partner Maridi Service Agency is deeply worried, “Thanks for your concern about the people of South Sudan, we hope something good will happen soon through prayers and support from Friends of the people of South Sudan.”

Developers has distributed the second batch of roofing iron to 1,037 families in Aklan province.  It was funded by your gifts to the Philippines Appeal.  Tet Naraval of Developers says the distribution encouraged families to rebuild homes and restore their livelihoods. Recovery has been a slow process especially for families that were “financially challenged before the calamity.”

The National Council of Churches in the Philippines reports reconstruction is slowing down even though more than 2 million people are at risk without durable shelter.  Representing the NCCP, Typhoon survivor Rev. Irma Balaba urged the UN Human Rights Council to conduct investigations into the “slow, inefficient and inadequate response of the Philippine government to the plight of the millions of typhoon Haiyan/Yolanda victims.”  Noting the government has no plan to help the displaced, she gave examples of offices and homes raided by the military and paramilitary. 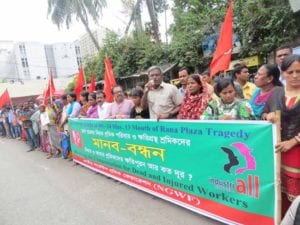 The National Garment Workers Federation reports the Rana Plaza Trust Fund is paying  NZ $742 compensation for each victim of the building collapse but their families deserve much more.  The Fund  chaired by the International Labour Organisation has received US$17 million of the US$40m needed.  NGWF says 15 of the 29 brands involved have  contributed to the fund.  They continue to advocate for those affected, their families and for better working conditions.  OECD Watch has released a new report.

ACT Alliance is advocating at the UN Human Rights Council for a legally binding instrument to end corporate human rights abuses.  Concerned about growing exploitation in extractive industries they are asking for human rights of be respected by business, giving testimony from people who have lost access to land, livelihoods and more.

Sustainable Development Goals following after the Millennium Development Goals are to be agreed at the 2015 UN General Assembly.  Last year the High Level Panel released “A New Global Partnership: Eradicate Poverty and Transform Economies through Sustainable Development” while in New Zealand the Council of International Development is asking the government to put people centred development principles at the heart of negotiations.  CID of which CWS is a member is asking that structural causes of inequality are addressed, job creation be a priority and both civil society and the private sector be involved.

Sarath Fernando of CWS partner Monlar says the “people who are worst affected by the present systems have to work out an agenda which can be carried out on their own.”  In the same way as nature regenerates itself, poor communities need to “depend more on what nature gives us free of charge and on the contribution of human effort that does not depend on capital.”  He says poor people who go hungry because they do not have money rely on nature to give them food.  Food is a gift of nature to feed the hungry not a commodity.  In Sri Lanka Monlar works for agricultural reform and to improve the livelihoods of poor, rural farmers.