17– 24 September World Week of Peace for Israel and Palestine

Open Wide Your Hearts to Refugees

The number of displaced people in the world continues to grow according to the United Nations Refugee Agency, UNHCR.  Up 2.9 million from 2016, the 2017 figures point to a global failure to contain the conflicts driving people from their homes.  This represents an average of one person displaced every two seconds.

Worship resources including a video and PowerPoint are available for Refugee Sunday—24 June in the Methodist and Presbyterian lectionary and 1 July in the Anglican tradition.  We encourage churches to celebrate refugees in our communities, the difference their support is making for refugees overseas, and to hold an offering for displaced people from Syria, South Sudan, Gaza or Myanmar.

The UN is currently negotiating new global compacts on refugees and migration.

A special thank you to everyone who has taken part in this year’s fundraising effort for Syrian refugees.  We have reopened the challenge for those who want to give it a go.  You can support this lifeline to refugees until July 31 or donate to the Syria Appeal. 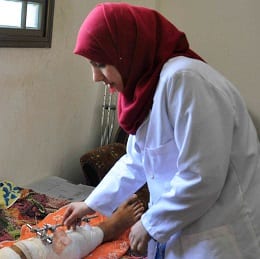 Over the last month the Department of Service to Palestinian Refugees in Gaza has reported an increased demand for their services.  They continue to treat some of the people injured in the Great March of Return, organised as a largely non-violent rally on the 70th anniversary of the Nakba or catastrophe, marking the displacement of 750,000 Palestinians from their homes.

As well as treating people discharged early from hospitals (pictured), DSPR Gaza’s three primary health clinics are dealing with an increased level of trauma brought about by the response from Israel.  At the time of the Return March, CWS expressed concern about the situation in which 128 Palestinians were killed and 13,900 injured. Life only gets harder for the 2 million people who are confined to the 365 sq km strip.  80% depend on humanitarian assistance.

DSPR Gaza provided healthcare for 26,000 families and vocational training for 245 people last year.  CWS relaunched the Gaza Appeal focusing on the high level of medical need in the territory.  You can also support the Palestinian Medical Relief Society.  Donate now to help people injured and traumatised.

CEPAD, the Council of Evangelical Churches, reports violence is spreading in Nicaragua.  Two months after unrest started, the faltering National Dialogue has restarted in an effort to resolve the tensions sparked by social security reforms.  More than 170 people have been killed.  Part of ACT Alliance Nicaragua, CEPAD is asking for support to its programmes which give people the resources to stay in their communities, and your prayers.  So far large numbers of Nicaraguans are not migrating to the USA.

Monsoon rains have arrived in Bangladesh causing extensive flooding and landslides in Cox’s Bazaar where more than 720,000 refugees have settled.  ACT Alliance helped families strengthen their homes in preparation and is assisting with relief supplies.  The race is on, with worse rains expected in July.  You can help refugee families by donating to the Rohingya Appeal.

CWS welcomes increased government aid spending in last month’s budget. Research fellow Terence Wood analysed the figures and found the announced increase of $714 million was compared with a hypothetical National government figure over four years. The real figures show by the end of the budget cycle, aid will be 15% higher in the 2021/22 financial year than this one – a welcome increase all the same.  You can read his analysis.  Peace Movement Aotearoa reported military spending is budgeted at a record $3,755,683,000 across Vote Defence, Vote Defence Force, Vote Education.

Read Creating Climate Hope to find how some partners are helping communities deal with the challenges of climate change.  When Ugandan partner the Centre for Community Solidarity read the story, Charles Rwabambari wrote outlining the increased stresses climate change is having on their work with families of HIV and AIDS orphans.  The rainwater tanks and training you found are giving them skills and resources to survive the harsh conditions.

CWS welcomes Sarah Wewege as Database Administrator and Website Assistant.  She previously worked for Embrace the Middle East, a British development agency that also partners with DSPR.  Sarah is happy to answer any queries you may have.

CWS is offering a Mentoring Programme on governance, social justice and strategic thinking.  Applications for the one year programme are open until 30 June.