In Mosul, Iraqi children are keen to get to school after years of displacement.  Photo: ACT Alliance/Paul Jeffrey

2019 is the UN Year for Indigenous Languages

The failure of nations to resolve disputes and stop persecution forced a record 70.8 million people from their homes.  About half the number are children, under the age of 18 and 3% are over the age of 60.

Announcing the latest figures ahead of World Refugee Day on 20 June, the United Nations refugee agency says new figures do not take account of the Venezuela crisis.  In this annual census of refugees (25.9 million), internally displaced (41.3 million) and asylum seekers (3.5 million), 13.86 million are newly displaced.  Some 6.7 million have fled Syria, the major source of refugees.  For the fourth year in a row, Turkey hosted the largest number—3.7 million people, followed by Pakistan (1.4 million) and Uganda (1.2 million).  Government statistics show 92,400 refugees were resettled.  UN General Secretary António Guterres acknowledged their courage and resilience.  What refugees need most, he said is peace.  New Zealand is one of the few countries to have increased the number of people it resettles.

CWS has prepared worship material for Refugee Sunday, 23 June in Methodist and Presbyterian Churches and 7 July in the Anglican tradition.  Please let Gillian know if you use them.

CWS invites applicants for its one-year decision makers mentoring programme, an opportunity to learn more about governance, social justice and strategic thinking as well as the work of CWS.  Applications for the one-year programme are open until 30 June.

Fiji: Living on a Minefield

Waqa and Elena are ready for the launch of a new project on July 1. There are rich mineral deposits under Fiji’s soil that could increase prosperity for all or destroy livelihoods and undermine village life.  SEEP wants village people to have a say over their future.  Read their story and support the Autumn Appeal.

CWS welcomed the increase in the aid vote.  Official Development Assistance is projected to reach 0.28% of Gross National Income.

On July 1, CWS will launch a new fundraising partnership with Trade Aid.  By entering the code CWS when you purchase goods on line, we will receive 20% of the proceeds.  Watch for the launch on our website.

Trish Murray has returned from a visit with the Tonga Community Development Trust which has been helping people repair rainwater tanks, rebuild and expand home and community gardens, and establish household poultry farms.  Your donations to the Cyclone Gita appeal matched by the New Zealand government have bought 19 community rainwater tanks, repaired or replaced at least 160 household tanks and 400 home gardens, and established 162 household chicken or duck farms – thank you!  Tevita (pictured) received materials for his hen house and bought his first 30 chickens to raise.

ACT Alliance has a delegation at the UNFCCC meeting in Bonn, from 17-27 June.  The team is pushing for a greater contribution on loss and damage for those most affected and more opportunity for women to influence outcomes.  This is the last major meeting in the lead up to the Climate Action Summit in September.  In Aotearoa New Zealand, CWS encourages people to make a submission on the Zero Carbon Bill, due July 16.  CWS was part of the campaign for this legislation. 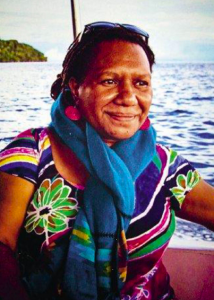 West Papuan scholar and activist Rosa Moiwend will speak in Dunedin, Christchurch, Wellington, Hamilton and Auckland from 24 June to 1 July.  Rosa will speak about the human rights situation in West Papua, the environmental damage and Papuan’s demand for self-determination in their own lands.  CWS has contributed to her visit.

Everyday is a day when refugees need food and hospitality. CWS welcomes Eric Park to the staff team in Auckland .  Special thanks to David Lawson for his contribution to CWS.  Eric is keen to talk to people about Operation Refugee 2019 which runs until September.   Please consider  taking up the challenge to live on refugee rations or walk/bike for 40km  Contact Eric:(09) 571 9150  eric.park@cws.org.nz.

CWS Update provides news, information, and stories.  Reproduction of items is encouraged with attribution to CWS.  Current and back issues are available.