Staff Changes
CWS is pleased to welcome two new staff members.  Fiona Brooker is the new Finance Coordinator and Michael Earle is responsible for Church and Donor Relations.  We are most grateful for the service of Alison Hardie who has recently retired as Finance Officer. 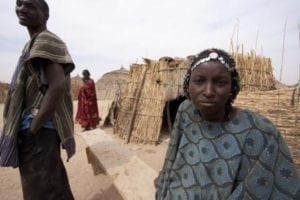 For many years ACT Alliance members have been working with local  people to build resilience in  the Sahel—a region prone to drought. Despite their best efforts drought is now hitting hard across nine countries in West Africa with more than 10 million people facing famine.  The drought may last but famine can be stopped with international support.  In response CWS has launched a Sahel Food Crisis Appeal.

For Fatumata (with child) and Akmoudou feeding their family has become increasingly difficult.  They are surviving by knocking leaves off a thorny tree with a long metal pole. “We normally only feed these leaves to our animals,” she explains, “but the situation is so difficult now that we are eating them ourselves.”  When asked if there is any nutrition in them she shrugs. “No, but we don’t have any choice. It’s an obligation. It’s all there is.”

Fatumata is from Tinakoff in northern Burkina Faso, a village like hundreds of others across the region that have experienced zero harvests.  They usually face food shortages in May or June but  this year they started in January.  The situation is compounded by their young men returning from Libya, Mali and the Ivory Coast without the extra money they usually earned that helped the people get by.  The latest humanitarian reports state that 1.6 million people in the country are in need of food aid.

The rains came late last year and when they arrived they were pitiful. Months of toil in the searing Sahelian heat came to nothing. “There are no crops and no pasture for the animals,” explains Elmamoune eg Fereby Baye. “This is the worst experience we have had since I was village chief. It’s the worst experience I have lived through.  The animals are hungry and skinny so we can’t sell them, so we don’t have any money to buy any food. It’s all about animals here. If the animals are not in good health, then neither are we.” (Photo: ACT Alliance/Christian Aid) 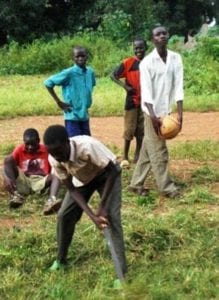 Reporting on last year’s work, the Maridi Service Agency (MSA) has achieved much more than helping young people through their inspiring sports programme.  The report comes as the UN warns four million people in the world’s newest country may need food assistance because of increased insecurity and the lack of rain.  The South Sudanese government has decided to stop oil production accusing the north of stealing hundreds of millions of dollars’ worth of oil.

In the last year MSA ran two nursery schools for 195 children living in camps for displaced people, a popular FM radio station which is both educational and entertaining, provided free education for 147 students at the High School they run, opened a vibrant community centre which is used extensively, provided intensive psychosocial counseling and trauma healing for 48 women and children, and organised extensive child protection campaigns in the community.  Thanks to Living Below the Line participants for their fundraising in 2011.

A Bolt from the Blue
Jo Spratt, coordinator of the NZ Aid and Development Dialogues group recently presented a paper in Christchurch arguing the changes made by the government to the aid programme have lowered its quality and left it inefficient.  The summary and full paper are available.

Direct Partners
Churches, schools and businesses wanting  to build a relationship with a community group working on good development or to know exactly  how their money helps make change may be interested in CWS’s new funding opportunity: Direct Partners.  In return for a commitment of $5,000 plus, CWS will provide all the necessary information.  Contact Michael Earle.

First MDG met
According to the World Health Organisation and UNICEF the first of the UN Millennium Development Goals has been met before the 2015 target. By the end of 2010, their latest report says over 2 billion people now have access to improved water, leaving 783 million people waiting.  The report estimates by 2015 92%  of the world’s population will have improved drinking water.  Sanitation is another story.  2.5 billion lack improved sanitation and the 75% goal is unlikely to be met by 2015.

More Changes for NGO Aid
Funding for Nongovernmental Organisations (NGOs) under the government’s aid programme continue to be changed.  New applications for the Sustainable Development Fund (SDF) are due on April 16 and a new contestable fund available to NGOs, the private sector and the state sector is being developed for the next financial year.  The $40 million fund ‘reflects the government’s interest in continuing to harness NZ expertise and comparative advantage’.  The funding ratios for NGOs would be 4:1 Pacific, 3:1 South East Asia, 2:1 rest of world, for private sector, 2:1 across the board, and no ratio for the state sector.  The proposal is currently under consultation.

Seven Weeks for Water
The World Council of Churches invites Christians to take an urgent look at “The economy of water” through the weeks of Lent.
Weekly reflections and resources are available.

Share Your Blessings
CWS focuses on sharing our blessings in Harvest Worship resource.  In Nicaragua families can enjoy the good life with your support because of their new gardens.