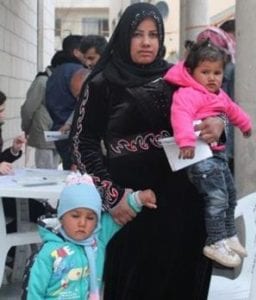 Photo: Nahla and her family, refugees from Syria at a food distribution centre in Mafraq.  Credit: LWF Jordan 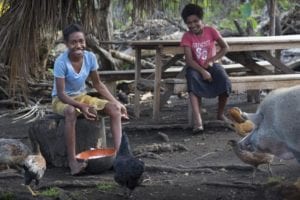 Vanuatu: Rebuild and Replant
In the two months since Tropical Cyclone Pam food, water, filters, pumps, clothes, tarpaulins, seeds, garden tools, fencing equipment and chainsaws have been distributed in communities on Tongoa, Ambrym, Efate, Epi, Erromango, Mataso and Tanna islands.  The Vanuatu Christian Council with support from Australian counterparts Act for Peace has worked closely with the government disaster management office to make sure relief supplies get to those who need it and are fairly distributed.

The majority of assistance has gone to the 14 communities on Tongoa Island.  Work has begun on restoring rainwater systems including replacing pipes and tanks.  The first batch of seeds are growing well in home gardens and the community nursery managed by students and parents at the secondary school.  Fences to keep out livestock are in place and communities are clearing fallen trees and other debris.  Flourishing gardens and secure water supply are essential first steps for the future They are grateful for the tools and equipment made possible by your gifts.

Refugee Sunday
Recent reports of refugees adrift in the Mediterranean and Andaman seas highlight the extreme vulnerability of people who have fled their homes in fear for their lives.  In 2013 the UN reported 51.2 million people were living as refugees and the number is likely to have risen.  CWS is supporting calls for New Zealand to increase the refugee quota, currently 750 a year.  Resources for Refugee Sunday will be available early June. 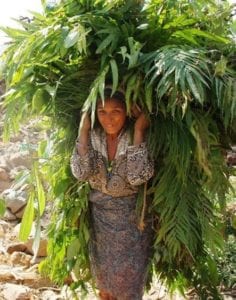 Nerves were shaken by a magnitude 7.3 earthquake on 12 May claiming more lives and causing widespread damage.  Work continues to clear fallen buildings and slips which can block access to vulnerable people.  ACT (Action by Churches Together) Alliance Nepal is reporting that with monsoon rains arriving shortly the highest priority is shelter including corrugated iron for roofing.  They are running psycho-social programmes to help people stressed by loss and their experiences as well as livelihood support.  They have been able to help at least 160-170,000 people with relief supplies in areas where access is difficult.  Work has begun to build latrines and other buildings.  Many resources including video clips and reports are available.  CWS thanks you for supporting the Nepal Earthquake Appeal.

Photo: A Nepalese woman from Lalitpur gathers food for her buffalo,rescued from its fallen stable.  Credit: LWF/ C Kaestner

Budget: CID calls for More
The NZ government announced an increase in aid spending of nearly $220 million over the next three years in this year’s budget.  Vote aid totals round $630 million a year which is not enough to reach the intermediate goal of 0.3% of GNI for aid.  Council for International Development’s Dr Wren Green says, “Our aid budget has been too low for too many decades while developing countries have been hit hard by the after effects of the world financial crisis.” CWS is a member of CID.

Pacific Humanitarian Summit
In the lead up to next year’s UN summit, the Pacific Regional Consultation will be held in Auckland 30 June—2 July.  You can share your views on how to respond to disaster and conflict in an on-line consultation process.  Four themes focus discussions: humanitarian effectiveness, reducing vulnerability and managing risk, transformation through innovation and serving the needs of people in conflict.

India: Rights Under Threat
The Human Rights Foundation in Tamil Nadu reports increasing challenges to local democratic processes.  Amendments to national legislation are removing the powers of local panchayats and Gram Sabhas (local elected councils) and pushing them to become instruments of government policy rather than representatives of local concern.  HRF trains and supports Dalit women in leadership.  Once elected, they advocate for community interests including housing, protection of women and community resources like land and water.  HRF sees women in local government as an important protection against corruption and they are able to provide effective leadership for community interests as well as challenging cultural norms around the role of women.

Jordan: Health Training
Refugee and local women were interested participants in health education programmes focusing on H1N1 flu, obesity, anaemia and osteoporosis.  Participating in training programmes funded by CWS and the Ministry of Foreign Affairs, the women were able to take greater responsibility for their family’s health as part of a bigger programme run by the Department of Service to Palestinian Refugees.  They run children’s forums, health clinics, skills training and food distribution for vulnerable Syrian and Palestinian families.

Sierra Leone: Report back
The Council of Churches in Sierra Leone reports the Ebola sensitisation training run with CWS support proved effective.  They report, “Many of the communities told us CCLS was the only one who came to us” proving the value of face to face communication about life and death issues.  There are a few new infections each week as the country struggles to break the chain of infection.