CWS thanks 38 people who did Live Below the Line.  They have raised more than $10,000 for Developers in the Philippines.  You can donate until 10 December. 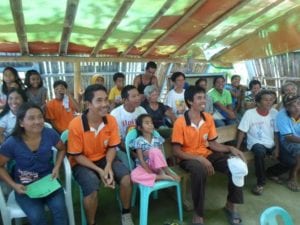 Community members listen intently to a farmer reporting back from his group on their needs and aspirations for the future in Aklan Province.  Photo: Developers

Philippines: One Year Report
The recovery after last November’s Typhoon Haiyan is progressing slowly.  The government decree forbidding homes within 40 metres of the shoreline has dislocated many people including in Tacloban from where most news reports came.  The National Council of Churches of the Philippines provided food for about 23,000 families, utensils to 8,345 and hygiene kits to 4,000 plus bedding and other items.  They are helping isolated communities rebuild and providing psychosocial care.  In the north of Aklan province, CWS partner Developers is working in local communities to identify needs and make plans for the future.  Thanks to your help, 12,999 people have corrugated iron roofing and 6 schools have been partly repaired.  Both NCCP and Developers need more funds to enable more communities to restore livelihoods, for example replace farming equipment, new seeds and plants.  Donate to the Philippines Typhoon Appeal.

West Africa: Ebola Response Appeal
CWS has launched an appeal for ACT Alliance members and church groups responding to the outbreak of Ebola in Liberia and Sierra Leone.  They are providing vital community education through churches on prevention and chlorine supplies to kill the virus.  At the request of the World Health Organisation the World Council of Churches is coordinating the response of faith communities.  Getting accurate medical advice, providing pastoral care and distributing food to quarantined communities are vital.  Please support the Ebola Response Appeal. 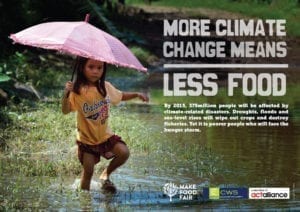 From 20—25 October UN negotiations continue in Bonn to reach a legally binding climate agreement by the end of 2015. Religious leaders invite you to join them in a fast for climate justice on the first day of each month.  John Nduna of ACT Alliance is one of many calling on world leaders to do more to stop the climate crisis.  CWS has produced a new edition of Youth Topics.  Contact Emma for copies.

Nobel Peace Prize
CWS sent a message of congratulations to Kailash Satyathri who along with Malala Yousafazy was awarded this year’s Nobel Peace Prize.  CWS as a member of the Set the Child Free campaign participated in the Global March against Child Labour which Kailash continues to chair.  More than anyone he brought the exploitation of children as slave labour to global attention and is a leading advocate for their right to education.

Dominican Republic: ACT Meets
Trish Murray is attending the second ACT Assembly meeting from 21-25 October.  Members of one of the largest development alliances are seeking ways to strengthen their collaboration in an effort to drive down global poverty.  The plight of stateless Haitians born in the Dominican Republic was highlighted by the local community.

Haiti: Trish visits ICKL
In CWS’s first visit to partner, the Institut Culturel Karl Lévêque since the 2010 earthquake in Haiti, international programmes coordinator Trish Murray met some of the communities in which they work.  After a four hour drive, river crossings and horse trek, Trish met with representatives from farming communities embarking on a new livelihood programme with ICKL’s help.  They told her, “We have no relationship with government.  We have to fend for ourselves.”  ICKL plays a vital role in helping such communities make the most of what they have, including starting community businesses to fund local schools.  She will visit CEPAD in Nicaragua next week.

Christmas Appeal 2014
This year’s Christmas Appeal shares stories of people recovering from disaster made possible by your support.  Please help us “Build Hope for Tomorrow” by telling others about the appeal.  Parishes are reminded to send orders in as soon as possible.  We are looking for volunteers who can speak on our behalf around the country.  If you can distribute appeal envelopes, need resources or can speak please contact Emma.

South Sudan: Catastrophe?
Prospects for South Sudan look grim according to a joint agency briefing: From Crisis to Catastrophe.  This year famine has been narrowly avoided but with the dry season beginning, the bitter conflict that provoked the crisis looks set to resume.  Talks have failed to broker the peace desperately needed to avert severe food shortages that could affect more than two million.  Churches are pressing for a resolution and have asked for international support.

Gaza: Promises of Rebuild
The visit of UN Secretary Ban Ki-moon highlighted the humanitarian situation in Gaza where 75% of the population are now dependent on foreign aid.  Palestinian officials estimate it will cost more than $5 billion to rebuild.  Constantine Dabbagh retired director of DSPR Gaza explains Palestinians do not want to be dependent on aid.  In reiterating their call for an end to the Occupation, he says, “the international community should… recognise our rights and aspirations for a just peace in compliance with UN and international law.”  Support the Gaza Appeal.

Iraq and Syria Appeals
There is no end in sight to the suffering of people caught up in bitter fighting.  More aid will be needed in winter months—temperatures in the Kurdistan region range from +5 to –16 degrees Celsius.  The UN reports nearly 40% of the 1.8 million displaced Iraqis have found shelter.  10.8 million Syrians need food assistance and 3.2 million have fled.  Please support the appeals for Iraq and Syria.