17 October  International Day for the Eradication of Hunger

ive Below the Line 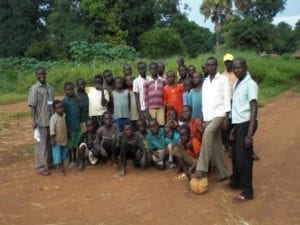 The hunger season begins for  this year’s participants in the Live Below the Linechallenge. From 24-28 September nearly 30 people have signed up to spend $2.25 a day on food— the global extreme poverty line.  They will be joining hundreds of New Zealanders determined to do something about poverty.

CWS is raising funds for running the Maridi Service Agency in South Sudan.  MSA is giving young people new opportunities after decades of conflict.  A key part of the programme is the sports activities which give the community a focus.  MSA runs two nursery schools and a secondary school.  In addition if offers community training opportunities.  The popular and only radio station, Maridi FM, is run by MSA .

“We sincerely appreciate the work CWS is doing and all the efforts to fundraise for our activities,” says Wadalla Peter, the Coordinator.  Live Below the Line participants need sponsors for their efforts.  Your donation will help some of the 1.4 billion people who live on or below the line.

Sahel: Food Demand High
Crops are green but there is still no food as those living in the Sahel wait to harvest new crops.  For the next few weeks, 19 million people will be very short of food and dependent on food aid. The need should ease in October when the harvest begins.  Flooding, cholera and locusts have added to the suffering.  Conflict in Mali continues to disrupt trade and produce refugees in the region.  Help is needed. Please support CWS’s Sahel Food Crisis Appeal.

The 2012 Christmas Appeal  features  CWS partners working to save land and livelihoods.  This year’s kit has been mailed to parishes.  If you would like a copy or other resources please contact Mandla at 03 3669 274.

WCC Central Committee
The World Council of Churches called on the United Nations to put Maohi Nui (French Polynesia) on the list of countries to be decolonised.  The statement was made at the request of the Council of the Maohi Protestant Church.  France made Maohi Nui a protectorate in 1842 and undertook 193 nuclear tests on two of its atolls.  CWS supports the call.

The WCC Central Committee has called for dialogue “in order to safeguard the unity and pluralistic nature of historic Syria” and “to respect the ability and responsibility of the Syrian people to find solutions to the crisis, and to refrain from outside military interventions”.   ACT Alliance members are helping Syrian refugees in Jordan and internally displaced people.  Refugees are continuing to pour across the border.

Sudan: Conflict Spreads
The ACT Alliance fears the emergence of a humanitarian crisis with more than 1,000 refugees crossing into the Upper Nile state of South Sudan from Sudan each day. They are escaping fighting between the Sudanese government and forces in the border states of Blue Nile and South Kordofan.

“The situation is alarming,” says Mairo Retief of ACT Alliance member the Lutheran World Federation.  “We saw thousands of refugees in camps living in unhygienic conditions, exposed to the harsh weather, without access to clean water, adequate food or health services.”

The situation remains precarious, and the absence of a peaceful settlement between the government and rebel groups remains elusive.  No meaningful dialogue has begun between the conflict parties, prompting ACT Alliance to project that these populations will need humanitarian assistance for some time to come.

UN: Palestinian Economy
The UN Conference on Trade and Development released a new report expressing concern for the long term prospects for Palestine. Unemployment continues to rise and agricultural production is in decline.  Gaza’s population of 1.6 million is to rise by 500,000 over the next eight years, making life extremely difficult without improvements in the delivery of water, power, health and schooling.  The report states, “Food insecurity affects two of every three Palestinians in the occupied Palestinian territory, but is most severe in Gaza. Also alarming is the poverty rate in East Jerusalem, estimated at 78 per cent”.

Israeli historian Ilan Pappe spoke at the National Press Club of Australia in September.  The podcast is available.

Week of Action on Food
CWS invites churches to take part in the international Week of Action on Food to focus on food justice  The annual week coordinated by the Ecumenical Advocacy Alliance is an opportunity to reflect on how  many of the current ways of producing and distributing food are not meeting the needs of the world’s poorest peoples.  It is a time to think about your own food choices and to take action to ensure that the right to food is enjoyed by everyone.  With more than 900 million people hungry and the likelihood of rising food prices, agro-ecological farming by smallholders is of great importance.

Using nature’s free gifts to grow food in ways that are more sustainable and profitable in the long term is a focus for Sri Lankan partner, the Movement for Land and Agricultural Reform (MONLAR).  Their training programmes sets up small home gardens to help families meet the food gap.  MONLAR is working to improve traditional techniques which cost very little.  Water conservation, working in cooperatives and planting traditional crops are just some of the methods they are promoting.  The programme is more important because the home garden scheme promised at the last election has bypassed those who need it most. 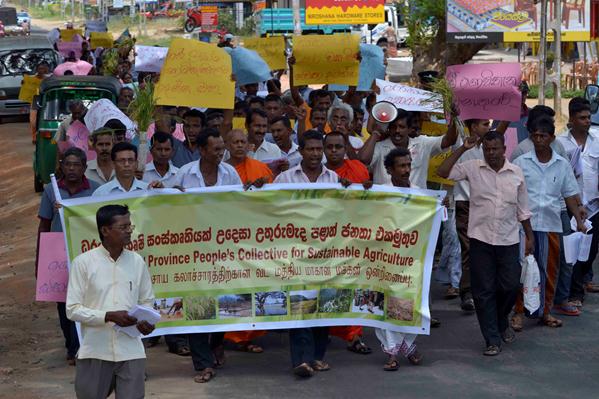