The global COVID19 pandemic is unrelenting.  The task to protect the most vulnerable communities is critical as poverty rises and new viruses spread.  People are anxious and afraid.

People need water, soap, facemasks, and cleaning supplies.  Few people in the poorest countries have been vaccinated.  Health clinics and hospitals do not have the most basic supplies.  People have lost lives and livelihoods – more than 54 million people are hungry in the Asia-Pacific region because of Covid-19.

We need your help to reach the most vulnerable families.

Our partners are already working with them and are preparing to distribute food, health information and protection, and comfort.

Hand washing and social distancing are key strategies to protect families.  Yet 2 out of 5 people around the world do not have basic handwashing facilities.

In refugee camps and crowded homes or neighbourhoods, there is nowhere to self-isolate.  Many people already lack clean water and soap.  They have limited access to medical care or reliable information.

Workers have lost jobs and livelihoods.  Food rations are not being distributed to everyone.

In many countries, health systems are weak and medical treatment expensive.  The poorest people are likely to be the most vulnerable.

The virus has not gone away.  They still need our help.

Our partners are close to their communities.  They have distributed food and medical supplies to people with no resources.  They are sharing news, correct medical advice and offering support.

Latest figures are available from WHO.

In Uganda young people are making facemasks and starting rabbit farms thanks to your donations.

Read a special thank you message from Charles, director of the Centre for Community Solidarity.

In the Middle East, the Department of Service to Palestinian Refugees is providing critical support.  Staff are worried refugee families will not get the rations promised by their governments.  They are working from home to support Iraqi, Palestinian, Syrian refugees at a distant.  Their educational programmes have closed.

In India, Nicaragua, the Philippines and Sri Lanka our partners are also helping with food supplies and water.  In Uganda, the focus is on water.  All partners are providing education to the communities they work with and are answering questions.  There are many more people in need than they can help.  Please donate if you can.

When Syrian and Palestinian refugees realised that life was going to be so much harder with COVID19 in Jordan, they knew they could help.  In November 2019 they had planted gardens in two green houses built under the guidance of the Department of Service to Palestinian Refugees.  They grew zucchini, cucumber, tomatoes, green beans, and leafy vegetables such as lettuce, rocket, parsley and more.

No longer able to cook the food in DSPR’s kitchen because of social distancing, they made up 150 food parcels (including vegetables and other goods from the kitchen for the poorest families in the Al Husn Camp where they lived.

Volunteer Abeer (pictured) who had 30 years’ experience as an agricultural engineer is part of the team.  She was excited to be able to put her knowledge and skills in what she loved to do the most – training women in small scale farming.  The women learned how to run small businesses at the DSPR training Centre.  The women used some of the vegetables in the production kitchens. “We started producing all kinds of food, pastries, and sweets and managed to organize local Bazaars which was a good start for small income” said Abeer. Even schools, families, medical centers, and other institutions inside the camp started ordering from our group.

Thanks to DSPR Jordan for this story

Lino has worked hard all his life.  In the good years, he had a little money to spend but mostly he ate what he grew.  During Nicaragua’s civil war in the eighties, he and his family got by 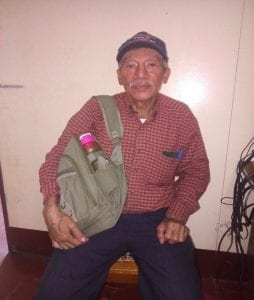 as best they could but he has never seen anything like Covid-19 before.  Like many of the people Christian World Service partners work with, he is very worried about community transmission.  He can rarely afford medical care and without help, he cannot afford basic protection measures.

“The inhabitants of our community [of Santa Josefina] have few resources.   Staying at home, as many people are told to do, for us, small farmers and heads of family, is not possible. We need to attend to feeding our families,” says Lino.

Many use public transport to go to work, sell farm produce or buy basic items of food.  He says they have always been careful about washing their hands but cannot afford the high costs of hand sanitiser, soap and facemasks.

CWS sent an additional grant of $19,000 to CEPAD, Consejo de Inglesias Evangélicas Pro-Alianza Denominacional or Council of Protestant Churches of Nicaragua for many of the 1,350 families in these communities.  They have distributed health kits (including soap, disinfectant and masks), and plan to give out grain and vegetable seed packages, and water filters as well as provide additional counselling to families struggling to cope.  By May, more than 540 family members had returned from working in Costa Rica putting more pressure on already poor households who had relied on the remittances they had sent home.  Radio Cepad and field staff continue to share good medical advice on the virus and support families under pressure.

CEPAD has trained Lino and farmers in neighbouring communities to care for their soil and introduced new crops.  This agroecological approach means their families are eating better.  Fruit trees like oranges, limes, mangoes, peaches and papayas are flourishing.  Lino replanted seeds he saved and is looking forward to harvesting squash and malanga – a type of taro – in the rainy season. With the rich variety of food he is now growing on his small plot of land, Lino says he is better prepared for the hard times his family are now facing.

Nicaragua has undertaken basic education but the lack of testing means the number of infected people is unclear.  The country has limited resources to treat the complex medical conditions associated with the virus.  Cuba has sent highly trained medical personnel to assist its vulnerable health system and the government has endeavoured to educate the population about the disease.

Lino wants to send his thanks to supporters for being attentive to small farmers like him.  His faith in God and the commitment to the wellbeing of his family will help them move forward he says.

Thanks to CEPAD for this story.