CWS gives thanks for the life and contribution of Rev. Barbara Stephens, National Coordinator from 1986 -1994. 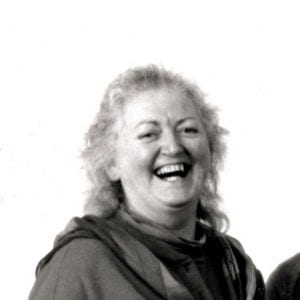 Barbara lead the organisation through a period of significant change, drawing on her learning and experience of working as the Education Secretary for the Christian Conference of Asia.  In Asia she encountered emerging theologies that explored faith from places of suffering. Moved by the reality of families living on rubbish dumps or marginal land, displaced and indigenous peoples, and the plight of women ignored and exploited, she worked with local Christians and peoples of other faiths who took up their need for justice.

Returning to Aotearoa with a sharpened structural analysis and a more political theology, she helped the organisation think differently about what she often called the ‘aid business’.   She was highly critical of a charity model that involved doing good for those less fortunate.  Instead she worked from an understanding of poverty as a result of unfair structures that depended on the exploitation of the poorest people for cheap labour and the land and sea for their resources.  Aid was about redistribution from an unjust system and about letting the people decide their own future.  At the same time New Zealand nongovernmental organisations negotiated a new funding scheme with the Ministry of Foreign Affairs that enabled CWS to develop local partnerships rather than fund the appeals of the World Council of Churches.

In response to challenges from new leadership in the South or Developing World, there was a greater emphasis on participation and self-determination, especially the place of women. The WCC held major consultations on aid and to one of these meetings Barbara took maps of the world, showing the southern hemisphere on top.  When participants were confronted with these maps one morning they could immediately see what was at stake.

Barbara introduced consensus decisionmaking and emphasised learning within CWS.  More importantly, she worked hard to help New Zealanders understand what was happening in the world and encouraged people to see the links between poverty and exploitation here and overseas as primary to faith.  Her strong commitment to justice was matched by her faithfulness to the church, especially to the Church of Christ into which she was ordained, the Methodist Church and the ecumenical movement.  Under her guidance, CWS first developed its theological rationale, Partnership and Letting Go as a basis for its work.

“Barbara was passionate about understanding and challenging the causes of poverty and injustice, overseas and in Aotearoa New Zealand.  She was outspoken in her commitment to women, indigenous people and those who she saw as marginalised by the current system.  She has a major place in the history of CWS.  Barbara modelled what we stand for not only in word but also in deed,” Pauline McKay, National Director.

She was one of the first three women deaconesses ordained as a Church of Christ (now Christian Church) minister and more recently served as a presbyter in the Methodist Church.

A memorial service for Barbara was held on Sunday, March 21  in Durham Street Methodist Church, Christchurch.

One of my favourite memories of Barbara’s time as Coordinator of Christian World Service, is her attendance at a global meeting in Cyprus, convened by the World Council of Churches to discuss the principles and practice of overseas aid. Barbara had been challenged by the board to come up with good reasons for what they saw as expensive travel for an event which might result merely in more words on more paper. Barbara was up for the challenge, but typically, she did not simply sit down and write her rationale. She gathered the staff and the relevant CWS committees and engaged in lively discussion, lining us all up in a continuum from those who thought she definitely should not travel and those who thought she definitely should. The debate was vigorous. The final question to be answered was “what do we have to contribute that others may not think of?” The answer became LET’S TURN THE WORLD UPSIDE DOWN. In other words, let’s see reality from the perspective of the south. Let the poorer countries of the world set the agendas and the rest support their initiatives and finance their programmes. The next step was to create an image of the globe turned upside down and get large posters made, showing Africa and South America, most of Asia and Oceania in the northern hemisphere and Europe and the USA in the south. Armed with bundles of posters, Barbara set off for Cyprus. Just before the formal opening of the conference, she enlisted the help of former colleagues and friends from her time as Education Secretary at the Christian Conference of Asia. While the other delegates were at dinner, they papered the walls of the conference room and corridors with the upside/down posters They even plastered them over the walls inside the toilet blocks.  There was uproar from the northern aid agencies and contented smiles from the southern hemisphere delegates.

This says so much of who Barbara was and how she worked during the 8-9 years she coordinated Christian World Service.

I first met Barbara when she was appointed coordinator of Christian World Service. She took over this role in a time of great change. The National Council of Churches, under the leadership of Jocelyn Armstrong, was in the process of bringing into being a rather different form of ecumenical life in this country, the Conference of Churches in Aotearoa New Zealand. Barbara embraced this concept with enthusiasm and made its goals her own.  Society was changing as the neo-liberal economic policy was being implemented in this country and others – with its corresponding pressure on the poorest citizens. Racism and anti-racism movements were clashing in different ways. In all of these areas Barbara was well equipped to lead workshops and encourage new learning. She gave herself to this task with energy and enthusiasm. Government overseas aid policy was changing and Christian World Service, along with other similar agencies, had access to significant sums of government money. This enabled Christian World Service to expand its reach and form direct partnerships with many new groups all around the world. From time to time Barbara would visit such groups, to listen and learn and to take on new initiatives.

Education for justice and solidarity with others were keystones of her life. Marches and protests and placards were the order of the day over those years and worship led by Barbara was often an uncomfortable experience for those who attended, as she reminded us all of the injustices surrounding us.

Barbara was extraordinarily generous and there will be people everywhere who have household items which she happily handed over if we admired or needed them. I used to say to her often that we religious sisters took a vow of poverty, but she lived it. She even gave away her car! She was not attached to properties either and lived in at least 5 different places in Christchurch, sometimes owning, sometimes renting, sometimes alone, sometimes creating community with others. Many of us will have taken our turn with the packing and unpacking process. She was indeed a pilgrim on this earth.

She was also an avid learner all her life and when she finally had the opportunity, she returned to university and added to her theology degree, the degrees of Batchelor and Master of Arts. Her illness ended her dreams of doing a PhD.

Her hospitality was legendary and her friendship a treasure to be honoured.  I shall never forget her appearance in our house at 2.30 am on the morning of the September earthquake. To reach us she had “paddled” her way through bubbling liquefaction, in pitch dark, with the ground swaying in aftershocks – just to assure herself that we were safe. That was Barbara!

It is difficult to capture all of Barbara’s personality and gifts. But it would be true to describe her as a quintessential Christian woman. Her faith was grounded, lived out in action, generous giving and a life-time quest for the God of truth and justice.  As we finally farewell her today, let us reflect on our own personal memories of her and give thanks for the place she will always hold in our lives.

We give you thanks for the life of Barbara, our sister, colleague and friend. We celebrate her generous spirit and her warm-hearted service of others, especially the poor, the vulnerable and the voiceless. May we be encouraged by her example to spend our own lives in your service. For this we pray

You sent your Son to live among us and teach us the way to live. To this mission, he gave his life and for it he suffered a painful death. We honour the courage with which Barbara so often spoke and acted for truth, justice and peace. May we learn from her to be steadfast in the pursuit of truth and justice in our troubled world. For this we pray

You are the Creator of all that exists. We thank you for the beauty and wonders of the universe and especially planet earth. May we grow in reverence for the whole of creation and, like Barbara, continue throughout our lives to understand, appreciate and honour all created realities. For this we pray

You are God of compassion. We pray that you console now all those who mourn the death of Barbara. We entrust her to you and draw comfort in the conviction that death is not an ending but an entry into the fullness of life. For this we pray

We seem to give her back to you, O God, who gave her first to us. Yet as you do not lose her in giving, so do we not lose her by her return. Not as the world gives, do you give, O Lover of souls. What you give, you take not away, for what is yours is ours also if we belong to you. And life is eternal and love is immortal, and death is only a horizon, and a horizon is nothing, save the limit of our sight. Lift us up, strong Son of God, that we may see further; cleanse our eyes that we may see more clearly; draw us closer to you that we may know ourselves to be nearer to our loved one who is now with you. And while you prepare a place for us, prepare us also for that happy place, that where you are we may be also with Barbara for evermore.