After the explosion at Beirut’s port, young people from Dbayeh Camp turn up every morning to help people suffering from its effects.  Sylvia Haddad, executive director of the DSPR Lebanon (Department of Service to Palestinian Refugees), known locally as the Joint Christian Committee, tells their story: 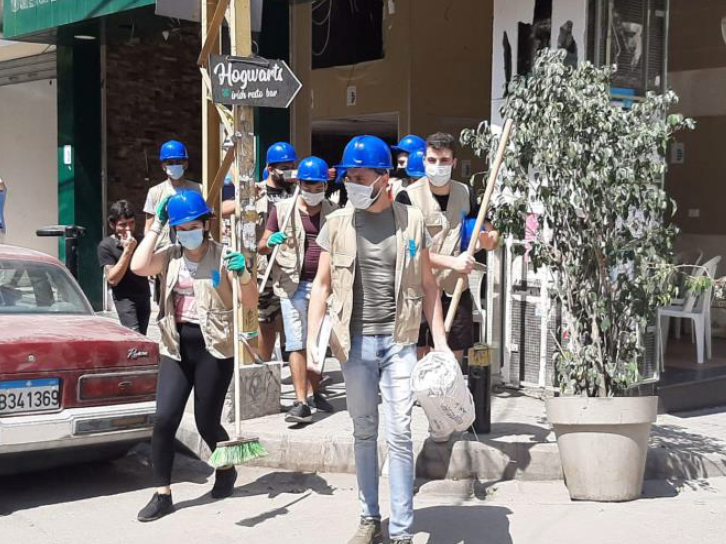 Young eyes turned to Elias Habib. The Joint Christian Committee (JCC) Youth Leader looked at about 20 young people standing before him. Shock was written all over their faces. Their hillside mountain Palestinian residences known as the Dbayeh Camp shook with the blast that ravaged Beirut’s port and its surroundings when a large amount of ammonium nitrate, stored at the port exploded on August 4. Over 180 people died, 6,000 were injured, and an estimated 300,000 homes were heavily damaged. Considered one of the most powerful non-nuclear explosions in history, the blast was felt in Turkey, Syria, and Cyprus – more than 250km away.

In Dbayeh, only 11km away, buildings shook ferociously as the deafening sound drove people out of their homes in panic. News soon reached them, however, that the explosion was at the port. In less than an hour, Habib was already calling on his youth group to get ready. “Brooms, gloves, masks,” he mentally listed.

“For now,” he explained to them as they gathered in the JCC library later that evening, “We will be helping in the cleaning efforts. Until we can help with the repairs, we will be covering their windows with nylon. Be ready when I call you.”

Habib paused. As a foreman on many construction sites and as someone who grew up in the vicious Lebanese 16 -year civil war, Habib could forecast what awaited them. But this youth group, aged from 16 to 24, had yet to see such ferocious destruction or, even worse, feel the misery of hurt ones.

Nevertheless, a few days later, the JCC located and settled in a small destroyed restaurant in the Mar Mikhael neighbourhood – just one of several areas in the Ashrafieh region affected by the blast. They cleared out the debris and set up base. They soon joined the hundreds of volunteers who descended on the devastated areas, sweeping glass shards, setting aside torn doors and windows, and scrubbing blood off walls and floors. Since Lebanese government officials were absent in the field, it was up to the volunteers to help the distraught victims and salvage whatever they could from the debris. 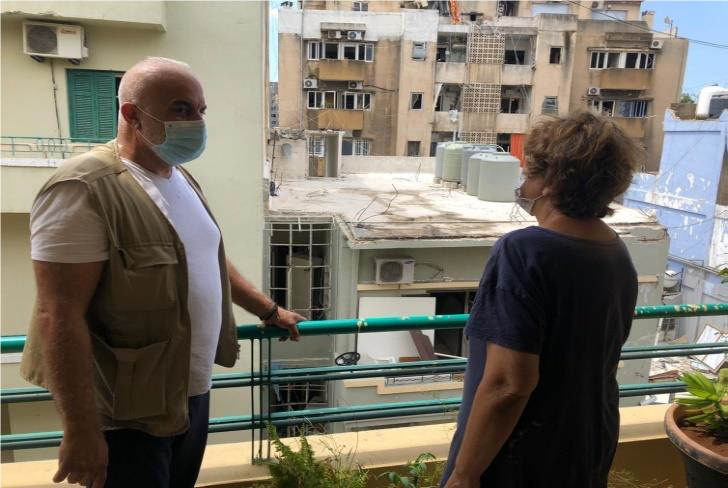 She did not have a chance

It was an overwhelming and emotional task, but aware that his youth group was watching his every move, Habib grabbed a thick bristled broom and matter-of-factly began to sweep one of the devasted homes. The youths quietly followed suit.

As they made their way into yet another home, hills of glass, cement, and wood debris welcomed them – the remnants of a living room. In the corner of what looked like a dining room, a table hinged on one leg threatened to collapse any second. The walls, once adorned with photographs and paintings, stood severely chipped and cracked. In the midst stood a woman, in her late sixties or thereabouts. She looked at the JCC group and attempted a small welcoming smile. But the shadow of the smile soon disappeared and was replaced by a forlorn distant look. Habib approached her gently. “Is there a specific room you would like us to concentrate on?” he asked quietly. The woman nodded and led him to a small room, just off the living area. “This is my sister’s room,” she said. Like the rest of the house, it was in shambles. It seemed to have been a modest room: a small bed by the side of the wall, a nightstand next to it, and a chest of drawers across the room. A small wooden cross was still hanging precariously over the bed. Glass shards and chunks of wood – pieces of the broken wooden shutters – completely covered the bed, dresser, and floor.

Habib beckoned to a few of his young workers and turned his attention back to the woman. She had wandered back to the shattered living room area and was staring at a big chunk of cement wall crumbled in a heap on the floor. “We will clean this up for you too,” he said with forced cheerfulness, “don’t you worry.

Habib looked around. As far as he could tell, the woman was unmarried, and judging by a dusty photograph still sitting on the dining room mantel, she and her sister, who also seemed single, shared this flat. Probably the original family home.

“Where is your sister?” asked Habib. “Perhaps we could be of assistance to her too.”

The woman’s eyes, suddenly filled with tears, reverted to the crumbled wall. Habib stared at her incomprehensibly and looked back to the heap. And then he saw it. An armchair of some kind, badly damaged among the debris.

The woman looked at Habib and nodded. Her sister was sitting in that chair. She didn’t have a chance. 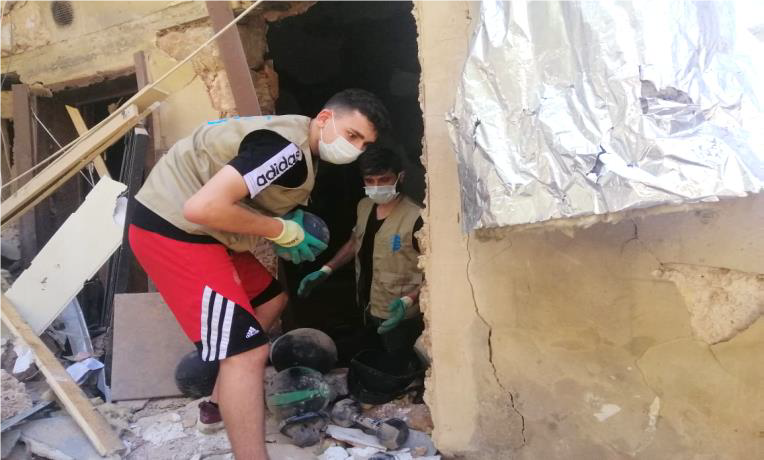 This was my livelihood

A subdued JCC group moved on to the next building. And the next. And the next. It was all the same. Shattered glass, wood, aluminium pieces, broken furniture pieces, crumbled walls, and disturbing stories. It was like living in a Hollywood Armageddon movie, Habib thought. Day after day, the JCC group put up nylon sheets across windows and balcony doors and hauled down the stairs hundreds of bags filled with debris. Glass shards were carefully placed in bags destined for recycling. In a way, thought Habib to himself, it was a field day for recycling companies. Never had they seen so much glass. No, he thought somberly, this was no field day. Not for anyone.

Certainly not for the young gym owner with cuts all over his face who sat on what seemed to be a remnant of a stationary bicycle. “Careful,” he called out as the JCC group walked in, “the walls, or whatever is left of them, are about to fall.”

Habib looked around. It was a small gym. Parts of weight machines and treadmills were everywhere.

“This was my livelihood,” said the young man. “I earned just enough to feed my mother and sisters.”

Now what? He asked no one in particular. His mother and sisters survived with slight injuries, he added, “but three of my best friends died.”

They usually meet in the gym every day for their workouts. After work. About now, he added.

The gym cleared, the JCC group moved on. More destruction, more heart-wrenching stories. At times, Habib doubted the wisdom of exposing his youth group to such tragedy, to such hardship. 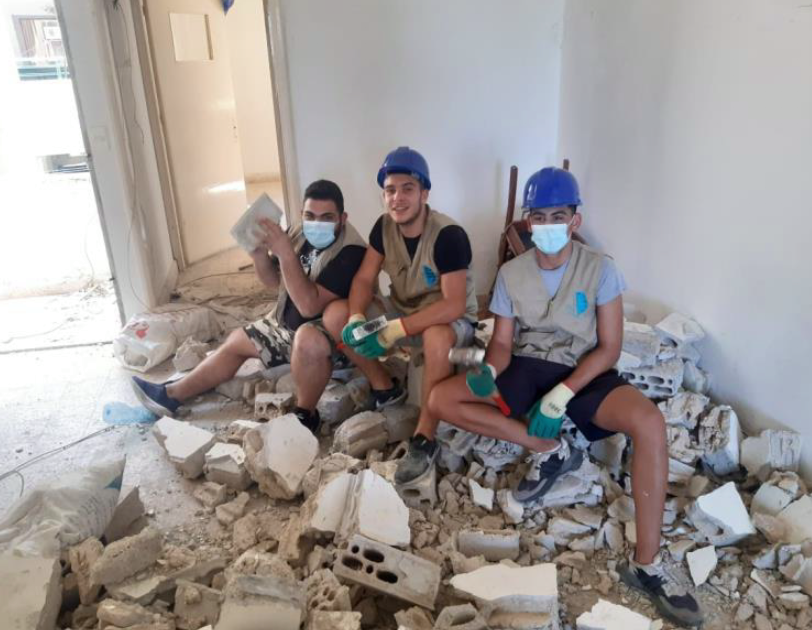 But there was more than that. They were Palestinians (albeit Christians) – a word which, for years, brought contempt in many Christian circles. Indeed, many massacres and battles were committed by both groups against each other – Christian and Palestinian militias – during the Lebanese civil war. Habib’s father was severely injured during such fighting. Habib himself fled from area to area to escape the clashes.

The JCC Palestinians were too young to realise the irony: they were aiding the very people who once upon a time were the enemies of their parents’ and grandparents’.

“You are Palestinians?” said one older woman, as the group hauled out the debris from her home. “And from the camp?” Habib nodded slowly. The JCC youngsters looked oblivious to the question. They smiled cheerfully.

The woman looked at the young people. “The government hasn’t been to ask about me,” she said. “They didn’t come to clean my home and help me. But you did.” She paused, then looked at Habib. “Curse the war,” she said. “You are my brother.”