“We feel this effort has been well worthwhile.  Apart from the funds raised, the event helped to keep alive awareness of the numbers of refugees worldwide, and our opportunities to support them in seeking a fuller life.” The Two Elizabeths.

Holding Refugees in the Light 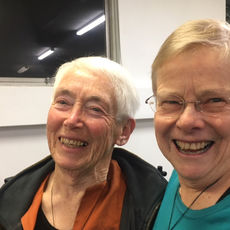 Dunedin Quakers have been supportive in the past of our involvement in living on refugee rations, including a fund-raising meal in 2019.  We were pleased that the Quaker Meeting agreed that we could repeat the event in 2020, on the third Sunday of a month, when there is usually a shared / potluck meal. We circulated the news in advance, advising those coming that they did not need to bring their own food contributions, as we would cater for the group, and invite donations to Operation Refugee.   Given the strict Quaker regard for truth, we decided against the phrase ‘pop-up banquet’.  Added to the event was a sales table, mainly of homemade marmalade, for which there is a regular demand, and plants, some brought by others.

Planning and preparation were the main challenges.  After offering a variety of dishes in 2019, when participants mentioned that it was a great feed, we decided this time on a simple menu more like what the refugees would have –lentils with onion and dukkah (the Middle Eastern spice we can get locally), rice and flatbreads.  This had to be scaled up from 2 portions to our estimate of 20, prepared in advance in our home kitchen and reheated on the domestic stove in the Meeting House.  We must have been distracted at the time, as we calculated and prepared double the amount of rice needed; 1 kg would have been enough.  Our one large stockpot was supplemented by another loaned by friends, and all the larger saucepans we had.   We think 1.25 kg of lentils would have been right.

Beforehand we made the marmalade, assembled the plants we proposed to sell, and shopped in bulk for the main ingredients.  A couple of days in advance we refined our timetable and made the flatbreads;  8 times the recipe in the Kete worked well, using ¾ plain flour and ¼ wholemeal, with half of them flavoured by dukkah.  The lentil dish was made one day in advance, to be reheated on the day.  There was too much to store overnight in our fridge, but our laundry is pretty chilly, so no problem.  We started the rice at home on the Sunday morning before Quaker Meeting, leaving it part cooked and finishing off just before the meal.

Other necessary items were a cash box with a notice inviting donations, cards listing ingredients, and little handouts with a picture lifted from a CWS newsletter, and links to the Operation Refugee website and our Everyday Hero page.

While we live in walking distance of the Meeting House, this was definitely a day for the car (electric, so our ‘green’ conscience was placated).   Loading an assortment of full pots, two boxes of plants, a second instalment of marmalade, and ourselves, was a logistical exercise; would everything survive the fairly steep downhill ride?

Level 2 restrictions came into the planning.  One metre spacing was impossible around the table at which we usually eat, so we decided to have a serving table in the main meeting room, and arrange chairs in groups, suitably spaced between and within each group.  There were willing hands to help with this set-up, which happened after worship had ended, and while people were talking over the regular cup of tea or coffee (we had decided not to restrict them to water).

Because of the size of the pans, gentle reheating had to take place while we were all engaged in the Meeting for Worship.  This was difficult to control, with pots cramped on a small stove. The two of us served from the table, with people using tongs to help themselves to flatbreads.  In the end, 17 people took part.  We missed a few with good appetites who were unable to attend, so had quantities of lentils and masses of rice leftover.  Some people were happy to take full jars home, and we were amply supplied for the next couple of days of our rations.  Some unsold plants have found a home in the Meeting House garden.

The food seemed to be well enjoyed.  If we thought people were picturing refugees living well, we suggested they consider living on the same, every meal for the next 15 years or so.  Our friends were very generous; contributions on the day and follow-up donations totalled $440, which helped us each achieve our $500 target.

You can help refugees in Jordan and Lebanon by supporting this year’s Operation Refugee.  Why not take on the challenge?