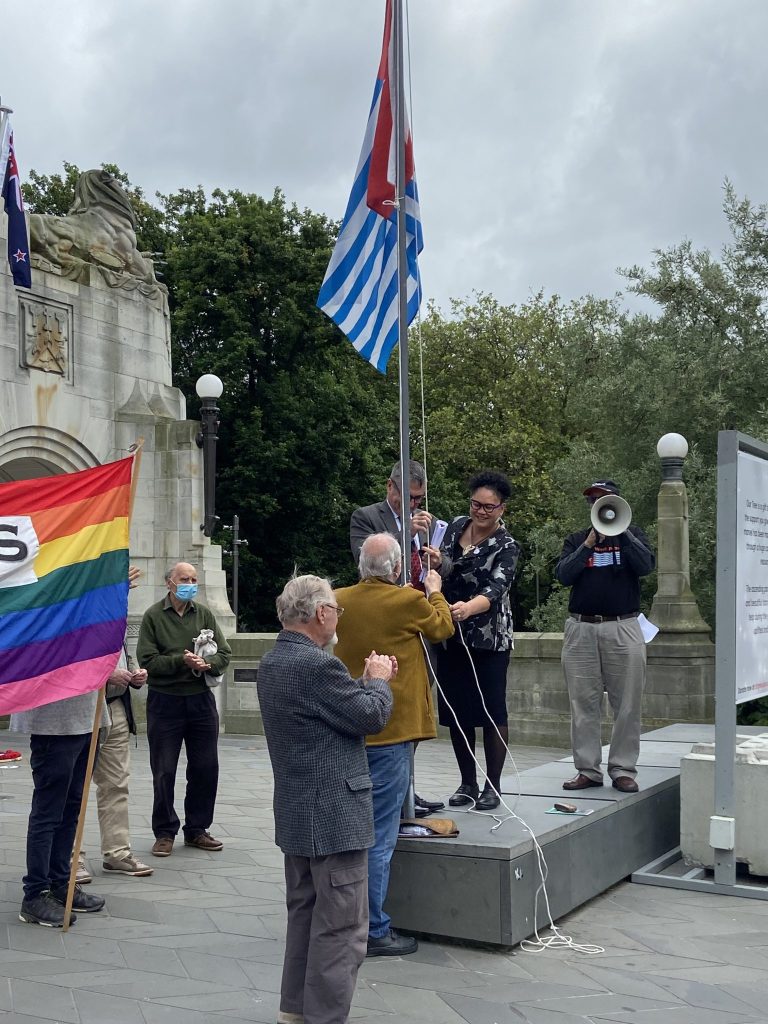 “Sixty years ago today, the West Papuan people held a congress and declared independence from Dutch colonial rule. The Morning Star flag that we raise today has been banned by Indonesia – flying the flag can lead to imprisonment, torture and even death,” Murray Overton, CWS National Director who was one of the speakers at the rally.

At evensong, we joined in prayer at the Transitional Cathedral.

“But the one who endures to the end will be saved.” Matthew 24:13
(from the reading for the day)

When I say: But the one who endures to the end will be saved.
Please respond with the prayer: We will keep the faith

Eternal God
Source of Life and light
We pray for our world, in its confusion and fear.
We look to you for courage and strength, to hear the voices of people who are in danger, to respond to people in bondage and pain, to work together with people who long to be free.

On this day we remember West Papua, a rich land of high mountains and plains, graced by forest and fauna, resting on beds of gold, copper and minerals, home to iwi who have lived there since time began.  Today we join with them to celebrate their dream of independence – a light that burns strongly – made visible in their flag, the Morning Star.  Sixty years ago, its people had a glimpse of a future free from colonial rule – only for it to be taken from them in the months ahead.

Today, we pray for the indigenous people whose lives have been disrupted by history and the long march of development.  The development that cuts the ancient trees, that clears the land for palm plantations, that mines its rich minerals and resources – for profit but not for the people of the land.

We pray for people who know their world closely, for people who do not have the food they need for each day, for the people who are tortured, imprisoned and killed for being West Papuan.

Today, we pray for the people who have come to West Papua, who have built homes and set up businesses and started livelihoods, who do not know the land or its stories.  May they learn to take heed of those who were there first, to the people who call their land, a land of peace.  May the violence and exploitation end.

On this day we link our prayers with others who seek justice and freedom.  We pray for Pacific peoples and the Pacific Conference of Churches.  We stand with them as they seek recognition for West Papua and the self-determination of its people – in the region and at the United Nations.

On this day, we pray for all those who seek safety from harm, recognition of human rights and dignity.
We pray for ourselves and those we know who are in need of comfort and hope.
We pray for peace.

In the Name of the Holy One who comes in peace
Amen.