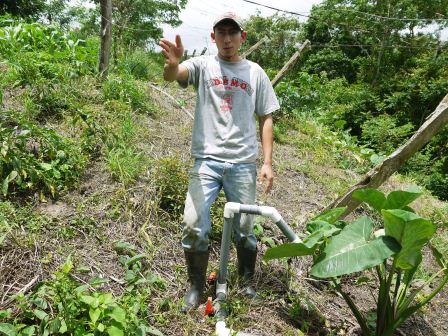 Luis aged 24 leads the community development in Malacatoya, a rural village outside of San Jose de los Remates, some 96 kilometres from Managua, the capital city. In 2013 he and two other farmers gained access to water from a motorized riego that pumps water to their farms.  Hearing of the effects of the 2014 drought, they gave the pump to a neighbouring community facing hunger and starvation.  “We could manage without it,” said Luis.

Grateful for the progress his community in Malacatoya has made, he spoke very highly of CEPAD.  Now growing 25 different crops using organic techniques and a rotation system, his life has improved.  “I have been learning many things,” he said.

“Because of the disordered climate, the drought [in 2013] was long and hard,” Luis said. “We had enough clean water to drink, but we didn’t have enough water to cultivate. So, it was amazing when CEPAD brought the riego and trained us how to use it.” Luis Robles.

This system will allow them to harvest basic crops year round to provide food for their families and increase their income.
In Nicaragua, there are two seasons – a six month dry season, verano, and a six month wet season, invierno. The drought ended in May with the arrival of invierno, but many farmers are still struggling with water supply and the repair of fields and crops damaged by the severe drought.

CEPAD first arrived in Malacatoya about five years ago. Back then, Luis said, most farmers only planted corn. Now he grows more than 25 different crops on his plot. They began by bringing interested members from eight small communities together to decide what they needed and form a cooperative.   From CEPAD, he and other farmers learned about crop rotation and organic practices that reduce the amount of water needed for growing. They also provided seeds, plants, trees and the water pump.

Confident the cooperative is strong, CEPAD is winding up its work in Malacatoya and will begin the process with a new community.  “We had a good time when CEPAD came to our community.  Now we have different ideas which we learned from the programmes.  We can go further in improving our lives,” said Luis.

The best result of the changes according to Luis is a healthy future for his 16-month-old daughter Ingrid Alexa.