The climate challenge is one of the biggest we face. Rising temperatures are causing drought, flooding, and more intense weather patterns. It is the poorest people living on the most vulnerable land who are the first to suffer. Traditional growing practices are no longer sustainable. Communities are hit by unprecedented flooding.  People are going hungry because crops are failing.  Climate change is already undoing work we have done to help people out of poverty in places like Nicaragua and the Philippines.

Our partners are in the forefront of their communities trying to meet its life threatening consequences.  Climate change is adding to the injustices and inequalities they face on a daily basis.

In November, Glasgow will host crucial COP 26 climate talks.  Please pray and take action for climate justice.  People like Rev James Bhagwan, General Secretary of the Pacific Conference of Churches have made the journey to make sure negotiators know what is at stake.  The climate crisis is affecting us all – none more so than our Pacific whanau.

Read our COP26 Backgrounder to find out how you can join the movement for climate justice.

Pacific Churches Leaders made an urgent call for more action by governments and institutions to keep the global temperature rise to 1.5 degrees C above the preindustrial level and a rapid phase out of fossil fuels by 2050.  They want for immediate action to assist with community-based adaptation and risk management that foster resilience and overcome poverty.  They ask for at least US$100 billion annually to assist developing countries and for full consultation with and the participation of affected communities.

In the Philippines, Developers is now planting mangroves to protect coastal communities (pictured above) to provide protection from coastal surges and habitat for the fisheries on which communities depend.  In 2013, Typhoon Haiyan damaged or destroyed 94-98% of homes and crops on the northern coast of Aklan province.  Haiyan was one of the most devastating storms on record – windspeeds topped 300 km an hour.  With assistance from CWS, Developers has coordinated corrugated iron roofing for 3,061 homes, set up a farmer’s market, and the planting of 49,540 trees and root crops.  These vulnerable communities are improving first aid skills and making plans for the next disaster.  Read our report on their Mangrove planting project. 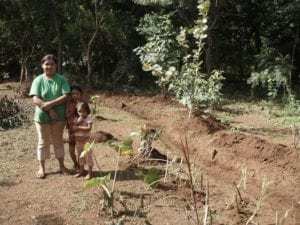 In Nicaragua, CEPAD is assisting small farmers survive unpredictable and inadequate rains, disasters and poverty. CEPAD staff train farmers living on 1 to 2 hectares in agro-ecological farming practices.  Through 40 local groups, these farmers will receive seeds, plants and livestock as well as training – families will eat better and be able to improve their income.  They are establishing community nurseries and micro-dams.   Ranked fourth on the list of countries at risk from climate change, Nicaragua needs to help people plan for a warmer climate.

In South India, Neythal is leading a state wide campaign threatening the homes and livelihoods of tens of thousands of fisherfolk.  The government and others used first the 2004 tsunami, then power plants, sand mining, ship breaking businesses, sand mining operations and shrimp farmers to take their traditional resources.  On the beach, in the street and through Tamil Nadu’s legal system, Neythal is demanding justice.

In Sri Lanka, Monlar is helping farmers recover after heavy southwest monsoons in May 2017.  The group including small farmers determined they would help colleagues in 15 districts affected by landslides and flooding on top of two years of drought.  Groups organised equipment and will teach their agro-ecological techniques so families can survive.  According to the National Building Research Organisation more than 60% of land in the central hills is prone to landslides, something Monlar wants to fix. 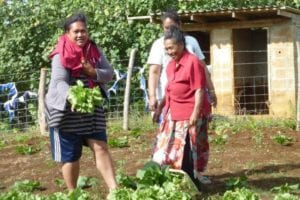 In Tonga, Ama Takiloa took part in a joint national simulation training so as to better prepare local people in case of an emergency.  Its community gardens share skills that will help families adapt to the climate and improve food security.  In 2013, Cyclone Ian damaged or destroyed 99% of homes.