Officially COP26 is the 26th Conference of Parties to the UN Framework Convention on Climate Change agreed in Paris.  At the meeting countries will agree on the next steps to address the climate crisis.   Negotiations will take place in Glasgow from November 1-12

The ambition of COP26 is to get commitments from countries to cut their emissions, strengthen adaptation and resilience to climate impacts, and scale-up finance and support particularly to developing countries. Countries have filed their commitments ahead of the summit but the UN has released a report saying these pledges will allow temperatures to rise a disastrous 2.7°C by the end of the century.

The IPCC’s 6th and most recent report revealed how urgently action is needed for the world to avoid environmental breakdown. The pressure is on for governments to produce bold action to address the greatest challenge facing the world.

The Key Issues at COP26:

Countries need to set ambitious emissions reductions targets for 2030 to enable the world to reach net-zero carbon emissions by 2050. These targets must:

We need to protect and restore the environment.  It is up to all of us to build resilient, strong and sustainable infrastructure to protect the lives and livelihoods of all people.

Vulnerable countries need resources to adapt to the significant impact climate change is already having and prepare for an uncertain future.

To achieve these goals, richer countries must deliver on their promise to raise at least US $100bn in climate finance per year. Countries like Australia, Canada, Italy, and Japan, who are some of the largest emitters, need to commit to an additional $2-4 billion per year to fulfil their obligations to climate finance.

“In the midst of the existential threat of the climate crisis on the people and biodiversity of the Pacific; the Pacific Household of God amplifies the groaning of creation and the cry of people who face the destruction of homes, of communities and nations across our blue Pacific. Confronted with the threat to identity, livelihood and sovereignty, we draw on our spirituality and indigenous knowledge and life-affirming traditional values as a source of our resilience and hope in such adversity.”  Securing a future for our Pacific – Pacific Conference of Churches’ Call to COP26

To our neighbours in the Pacific, the degrees of temperature rise and damage from climate change are threatening the viability of life as they know it. It is vital that their voices are raised at COP26.

In Fiji, PCC has established Lomana Na Vulagi (Love the Stranger) a farm as part of its carbon sequestration plan which will provide food for those in need, revenue for PCC and an on-site eco-school for young Pacific people.  At the end of COP26, staff will plant a tree for each person who travelled from the Pacific.

Pacific Civil Society including the Pacific Conference of Churches has agreed on the COP26 Demands.

What New Zealand is Doing

The Government will announce our updated nationally determined contribution (NDC) to the Paris Agreement, showing how it will cut the amount of harmful greenhouse gas emissions.   New Zealand’s current NDC pledges an emissions reduction of 11% below 1990 levels by 2030 and has been described as ‘highly insufficient’.

With a target of net-zero carbon emissions by 2050 now enshrined in law (Zero Carbon Act 2019), the Government is creating the Emissions Reduction Plan (ERP) for the next 15 years. The draft version is currently open for submissions by the public. However, the final plan will not be released until May after being pushed back five months by the Government. The draft ERP does not go far enough to limit warming to 1.5 °C. Instead of relying on the mitigation potential of forestry and land use, it needs to include a larger focus on reducing emissions from our high-emitting sectors.

Action: Make a submission to the ERP.

The Government has committed $1.3 billion over four years to support countries most vulnerable to climate change with over half of the money to go to the Pacific. 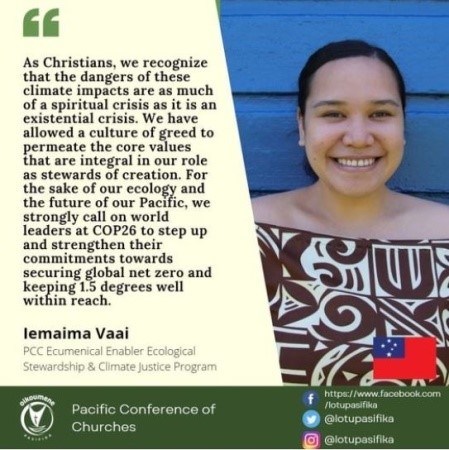 Giver and sustainer of life,

Grant courage to decision-makers at this critical hour.

Instil an urgency for effective action to forge a clean energy future to put people before profit and nature before perpetual growth to ensure justice for the most affected yet least responsible.

Help us to do everything we can to participate in restoring Creation.

In your glorious name we pray,