Women who work in Sri Lanka’s plantation sector have been hit harder than many others under Covid according to new research from Christian World Service partner, the Women’s Centre.

When the government imposed lockdown and a curfew in March, tea was one of the few sectors exempted.  While tea is a key export earner for Sri Lanka, its workers are treated poorly.  They experience the highest rates of unemployment, poverty and malnutrition and the lowest educational achievements in the country.

“The Women’s Centre and MONLAR (Movement of Land and Agricultural Reform) are pushing for the government to meet its commitment to raise their pay from 750 to 1,000 Sri Lankan Rupees (NZ$5.30 to $7.10) a day.  The pay rate is set nationally and they have had no increase for the last three years,” says Trish Murray, International Programmes Coordinator.

The research gathered data and stories from 250 women tea pickers living under Covid restrictions in the Central Province.  Of the sample, 54% did not work or were afraid to work.  Food or other assistance was minimal with only 64% receiving government relief.  Adult children, who had provided additional income to support their families, lost their jobs, adding to their mother’s worries.  The Women’s Centre and MONLAR distributed dry food rations to some families that received none. 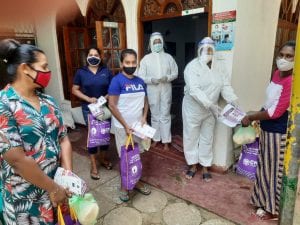 Workers did not always have the protection of masks or soap and water for washing, more necessary in the humid conditions.  The women workers reported increased incidence of domestic violence during lockdown, made worse by the cramped living conditions and meagre incomes.

The biggest worry for mothers was the shortage of food due to the lack of income.  Over half live in Line houses, a series of rooms housing on average 3-5 people.  Some shared a common tap for water and in 14% of cases a common toilet.

Selvi a single mother of two children said education was a challenge. She could not afford a mobile phone so she had to send her children to a friend’s place to try to do their online learning on her phone.  It has affected her children mentally and she has become more depressed because she cannot help them keep up their schooling.

The Women’s Centre supports factory workers and campaigns to improve the livelihoods and conditions for plantation workers.