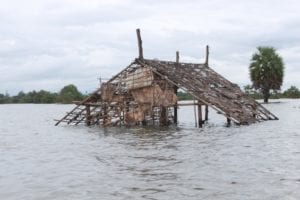 After heavy monsoon rains and flash flooding hit Myanmar’s south eastern states people are struggling to recover.   By 7 August 73,000 people were living in displacement camps, thousands of hectares of farmland were destroyed and water sources contaminated.  While many returned when the water receded, further flooding has forced some back to rundown camps with little support.  Church World Service Asia Pacific (CWS A/P) was able to distribute food supplies including rice, cooking oil and beans to 1,550 people in 13 villages in Kayin state.

Already impoverished from years of conflict, the people in Kayin and Mon states were dependent on the one dry season rice crop they could afford to grow – now washed away.  They need help to prepare land and plant new rice crops for harvest in October and November this year, including labour, seeds and fertiliser.   Animals have drowned and need to be replaced as well as infrastructure repaired.

CWS A/P has launched an appeal to provide food for 2,900 households in coming months in Kayin and Mon states.  Villagers will also be paid through a cash-for-work scheme to build community infrastructure like village pumps and roads.  With no other income this will help families buy their own food in the short term.

Access is difficult because of tensions between the government forces and the rebels.  CWS A/P is working through local community leaders to purchase and distribute seeds as well as organising local transport.  The alternative is no planting or borrowing heavily against the next season’s crop – meaning there will be little to eat.  The Myanmar Appeal will help fund the reestablishment of small farmers and their families.

Please donate to the Myanmar Appeal.