Three months after the first quake, ACT Alliance Nepal efforts are focusing on the rebuild.  The monsoon season has made travel in some parts of the country difficult or impossible.  ACT Alliance Nepal members are delivering corrugated iron to families sheltering under makeshift homes.  They have also begun using cash transfers via cell phone to speed up delivery.  More help is needed.

Immediately after the first earthquake struck Nepal, ACT Alliance started work.  They are working tirelessly, distributing hot meals, food items, non-food items like cooking utensils, blankets, water, sanitation, tarpaulins and medical care.  ACT Alliance Nepal has launched an appeal for US $12,800,000 to help families recover, rebuild and reestablish livelihoods as well as provide psycho-social help in the months ahead.  Efforts are concentrated on the worst affected areas in Bhaktapur, Dhading, Gorkha, Kabre, Kathmandu, Lalitpur, Lamjung, Rasuwa and Sindupalchowk districts where they are working with community partners.

Volunteers from Marwari Sewa Samiti are cooking food for 5,000 people a day in the biggest camp in Tudikhel, Kathmandu with food and equipment supplied by ACT Alliance member, the Lutheran World Federation. (Photo: ACT/DCA)

A shallow earthquake measuring 7.8 on the Richter Scale struck west of the ancient Nepali capital of Kathmandu, Pokhara, on Saturday 25 April 2015 at 11:41am Nepal local time. It is the most powerful earthquake to hit the region in 81 years and has left 2.8 million people in need of humanitarian assistance and more than 8,600 dead. Monsoon rains are due in June and people are vulnerable to disease.  Over 500,000 homes have been destroyed and 270,000 partially damaged.  Almost the entire country has been affected and tremors were felt as faraway as Delhi and Dhaka.

A second magnitude 7.3 earthquake struck on 12 May at 12:55pm local time claiming more lives and causing more damage.  Many people are staying outside as sizable aftershocks continued.  Relief operations have resumed.

Staff are on the ground and working with the Nepalese government and the UN to distribute food, water, blankets, emergency shelter and medication to those affected.

Please join us in prayers for the people of Nepal, especially for those who have lost loved ones and are in need of rescue.

O God, We hear of Suffering:  A hymn-prayer for Nepal written by Carolyn Winfrey Gillette – permission given for local church use in association with CWS/ACT Alliance appeal. Music and words.

Download a “Thank you” slide for use in churches or assemblies.

A Prayer for Nepal after the Earthquake

Loving God
We pray for the people of Nepal
Grieving for loved ones, for lost homes, for lost livelihoods
Living in fear and uncertainty even as aftershocks continue and rains tumble down
Struggling to find food, water, shelter and family members.

Give them the strength they need to salvage life from the ruins
To work together so everyone has enough for each day
The comfort to sustain them in their loss.

We pray for those who are responding to this disaster, especially Christian World Service and ACT Alliance Nepal, Action by Churches Together
For those who are making decisions about who and how to help
For the people distributing relief supplies so everyone has food, water and shelter.

Open our hearts loving God
To hear their pleas for help so we can respond wisely and with compassion
Today, tomorrow and in the weeks and months ahead
Until they have rebuilt their homes and livelihoods.

Wrap Nepal in your love and care.

We pray in the name of the Prince of Peace.
Amen 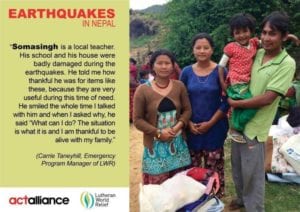 The second earthquake measuring 7.3 struck north-east of Kathmandu on Tuesday 12, 2015, at 12:45pm Nepal local time. It was the second strongest quake to hit Nepal recently, following the first quake of 7.8 magnitude on April 25, 2015. As a result of this most recent quake, at least 64 people were killed and 2,000 people injured. This figure is likely to keep rising as rescue services gain access to those affected.

The quake has caused an increase in landslides in many areas of the affected districts. Dolakha is a new district most badly affected by this quake, while two other districts, Rasuwa and Sidhupalchowk, have been further affected.

According to preliminary information received, the quake also affected the Kathmandu valley, causing the collapse of already partially damaged buildings, including government buildings.  The estimated number of collapsed buildings is as yet unknown. Further updates will be provided as information becomes available.

ACT Alliance Nepal have been doing detailed needs assessments in selected Village Development Committee’s (VDCs) in eight districts identified along with one additional district, Rasuwa. Information from these assessments will be available by 18 May.

ACT Alliance Nepal members will continue to actively join the thematic clusters organized at national and district levels, as well as the coordination meetings organized by the Government.

The increased landslides aggravated by the second quake, together with the coming monsoon season in June, pose numerous critical challenges including massive landslides for travel to the affected areas, particularly those which are located in rural and remote areas. As an example. All ACT Alliance members will continue to face such challenges as aftershocks continue.
14 May 2015

Emergency work is underway in Nepal in the wake of the earthquake Saturday which has cost over 4000 lives and resulted in devastating damage.

“We have become internally displaced now,” Laxman Niroula, Information and Technology Officer with The Lutheran World Federation (LWF), member of ACT Alliance in Kathmandu, says. “We put up a tarpaulin and a mat, and me and my family are sleeping outside.”

As aftershocks continue to make the situation difficult for the many who have already lost their homes, the LWF, which has been operating in Nepal since 1984, has begun carrying out immediate life-saving emergency work.

Laxman and his colleagues have hardly slept over the past 48 hours. Since the earthquake hit, the emergency team has been working to attend to people in need. In addition to hosting the headquarters of the LWF country program, Kathmandu is also the location of the LWF emergency hub for Asia. “We have more than 100 skilled staff in the region, and have been working with communities in the affected areas for decades,” LWF Humanitarian Coordinator Roland Schlott says.

Over the weekend, the LWF distributed tarpaulins, hygiene kits and ready-made food to about 400 families in Kathmandu. Along with assessing the situation in remote communities, LWF priorities are now to provide water, sanitation and hygiene materials, as well as emergency shelter to people who lost their homes or who are staying outside for fear of aftershocks.

“There are 100 aftershocks each day. Every time it starts shaking people run outside. Yesterday there was a big aftershock. People here are crying. They are scared,” Laxman says.

“We have been personally involved in rescuing neighbors. There was a five storey building which collapsed, there were eight people in it. We pulled out two people. Others managed to get out on their own.”

The LWF has a fully operational emergency team on the ground in Nepal and is coordinating its efforts with the Nepalese government, the United Nations, and through the ACT Alliance Nepal forum.

The LWF has been operating in Nepal since 1984 on disaster risk reduction and emergency preparedness and response, sustainable livelihoods, and community-led actions for governance and justice.

After the earthquake hit at about noon local time on Saturday, it was difficult for many people to get in touch with their loved ones, friends, and colleagues. Many of us were surprised while we were out, and were then stuck waiting for news. Networks were overloaded from people trying to make calls, and it was generally easier to connect via social networks such as Viber, WhatsApp, and Twitter. Reliable information was hard to come by, but the consensus was that aftershocks were expected until about 5-6 pm, after which it would be safer to move around. So many people were gathered together in open spaces, listening to radios, getting information through other news networks from abroad, and sharing stories, food, and water.

By around 6 pm, several DCA staff had gathered at the residence of the RR – currently out of the country for annual meetings in Denmark. His wife, together with support staff, and with help from the Danish Red Cross, had set up several small tents to offer shelter to those who did not have access to open space and materials themselves. Dinner had quickly been organized, and there is water available as part of an emergency preparedness set on the premises.

So we spent an uneasy night outside – together with the rest of Kathmandu – rocked by many aftershocks and virtually unable to sleep. There were 11 DCA staff, friends and family, including neighbours. We are expecting 8 more people tonight.

There is no electricity or running water throughout the city, which also means there is no access to ATMs or banks for cash for those who don’t already have it in hand. Most shops are closed, with the exception of smaller neighbourhood shops, which are quickly running out of stock, as people are buying up staple foods expecting prolonged supply disruptions. News are spread through small radios, Twitter, Facebook, etc., but reliability is not always ensured.

There are many makeshift shelters in the streets, as people had to abandon their homes quickly. Community kitchens have been set up, and there is generally a spirit of kindness and mutual support in the city. Hospitals continue to be overwhelmed, and there is a shortage of supplies, in particular drinking water and shelter materials – it has been raining on and off.

The government has advised people to stay out of their houses for the next 72 hours, i.e. at least until Wednesday morning local time – but this could easily become longer, as aftershocks continue. The original quake registered a 7.9 on the Richter scale, and today’s aftershock – just a couple of hours ago – came in at 6.7. More are expected. There had been 64 aftershocks before that one.

Ugine, a Korean neighbour staying on the premises with her two children, said, “We have been terrified by the events. But we believe God is with us and will help us survive.”

CWS has launched an appeal to provide relief supplies in Nepal.

The magnitude 7.8 earthquake has caused widespread damage throughout most of the country.  The death toll is approaching 2,000 people and continues to rise.

Many people are remaining outside as large aftershocks continue.  Rural areas were particularly badly hit and it will take some time for a full picture to emerge.

CWS is working with ACT Alliance (Action by Churches Together) of which it is a part.  Members are based in Kathmandu and other parts of the country.  They are mobilising life-saving relief: shelter, food, water, blankets and medications.

They are working with the Nepalese government, the UN system and church partners to coordinate their response.

“We are confident in our partners who have been working in Nepal for many years.  They are mounting a large scale operation to make sure those that need it most get the help they need,” says Pauline McKay National Director.

“We ask church people to remember the people of Nepal and those working to help in their prayers, and if they can. please donate to this urgent appeal,” she adds.

Note: CWS is a member of ACT Alliance (Action by Churches Together), a global coalition of more than 140 churches and church-related organisations that work together in humanitarian assistance, advocacy and development in more than 140 countries.