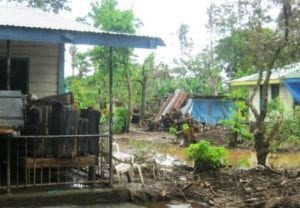 Cyclone Evan hit Samoa on 13 December 2012 and then Fiji on 17 December with devastating results.  The Ministry of Police in are reporting that 5 people have lost their lives in Samoa with 12 still missing.  On 19 December 4,858 people are sheltering evacuation centres in Samoa and a further 13,976 in Fiji. Power has been restored to 90% of the Central and Wester Divisions of Fiji.   Flooding has been extensive, housing and crops destroyed, and roads blocked.  Infrastructure has been badly damaged in both countries including to power and water supplies.   In Samoa 7 schools were destroyed and 44 more damaged.

CWS is in contact with partners working in Samoa and Fiji.  The Family Centre in the first phase of its assessment on Upolu Island has identified the following needs: food, water, tarpaulins to cover roofing damage and for shelter, tools including spades, building equipment and chainsaws and solar lighting.  With most banana and breadfruit trees stripped of fruit or totally destroyed and taro crops damaged, food supply will become a major priority.  In Fiji, CWS partner ECREA (Ecumenical Centre for Research, Education and Advocacy) works with communities living along the badly flooded Nabua River.

Donate now to help Samoans recover. Support is still needed in Samoa, especially in the south.  In March CWS made a further grant of $35,000 to help families rebuild their homes, continue to clear damaged trees and undertake other repairs and for small pastoral teams making sure elders, children and other vulnerable groups get the help they need.  Gathering and distributing crops, including plants that will grow the wood and leaves for rebuilding Samoan fale (homes) is an important part of the work CWS and the Family Centre are doing together.

March 2013 report from Tafaiomalo Loudeen Parsons of the Family Centre

“I was also able to visit the southeast and southwestern areas of Upolu and was shocked by the high level of devastation to buildings, and crops. So many large trees have fallen and have caused so much damage alongside the damages caused by flooding and high velocity winds.  Many families are still doing their best to repair their damaged housing, and there are still many families sheltering in makeshift buildings created out of recovered materials.

While in Samoa I learned that many of the fallen trees that have caused so much of the damage were in fact the more invasive tree species. These Tamaligi and Pasi trees were initially grown for their fast growth and suitability for manufacturing banana box casing in the 60’s and 70’s. Since that time these trees have largely been cultivated for firewood. The weakness of these trees is that they have shallow root systems so they were easily uprooted by the high winds causing damages to housing when they fall.  Once these trees fell alongside waterways they directly contributed to blocking waterways, creating a damming effect which burst causing the inland tsunami which flooded Apia suburbs and caused loss of life and homes.

In our preliminary pastoral visiting carried out in late December-January 2013 families requested help to clear away fallen trees and specifically for our team’s chainsaw skills.  We were able to assist during January and the first two weeks of February.
However, this kind of help is still needed on the southern coast where families are asking for similar support. Chainsaws are a rare commodity and expensive to maintain and run for more vulnerable households.

The extensive crop damages caused by Cyclone Evan have coincided with the deconstruction of the central agricultural market in Apia causing many farmers and agriculturalists to suffer a huge drop in income. This is having a double edged impact and deepening the economic blow of the December cyclone.

For many families in the urban area recovering from the on-going muddy conditions and on-going heavy is very challenging. I saw at firsthand how the season’s heavy rains continue to delay the recovery of dryer, healthier housing conditions which is dispiriting.  While fresh drinking water deliveries have ceased, water tanks have appeared in the  urban areas. Water tanks remain a high priority and these are still urgently needed. The water supply for several of the rural districts is still severely affected with water supply yet to be fully restored in parts of the southwestern/southeastern coastal districts .

The picture of one of the houses built through the December contribution made by CWS. It uses recycled roofing iron rescued from school buildings that were being demolished. The design is a modification of the ‘Tsunami houses’ having a different style of roof and raised post foundations which allow for future flooding risks. This building houses the family safely until they are able to afford to rebuild in the future.”

One Month On
Continuing rain has out a dampener on clean-up operations.  Water levels were high earlier this week in and around Apia.  Flooding, fallen trees, mountains of mud and debris are all obstacles to be removed.

CWS made an initial grant of $20,000 to the Family Centre working in Samoa.  The grant helped them provide blankets, sheets, clothing and food for families sheltering in a Caritas evacuation centre in the immediate aftermath.  The government closed evacuation centres on January 5.  More than a month later people are staying with relatives and neighbours while the clean-up operation continues.

The Family Centre has organised two types of teams based in Fa’atoia and working in the most severely affected zone between Lelata and Magiagi, Apia.  One group are builders and carpenters experienced in both Samoan traditional and more westernized housing.  The second are local young men who are clearing damaged trees with chainsaws.  The CWS grant is being used to purchase timber and equipment necessary to repair damaged homes and rebuild another that was completely lost in the cyclone.

A small team of builders is working in the Falealili district on the south eastern coast where damaged housing is older and less visible away from the urban centre of Apia.  Families living in the southern regions of Upolu were reliant on agricultural livelihoods supplemented with remittances.  Many Samoan families in New Zealand are struggling financially and will find it difficult to send as much money as in previous years.   The Cyclone Appeal will help meet this gap.

Last week a four person pastoral team began house to house visiting in Apia.  Families visited were grateful for this traditional form of support.  Reporting after the first day and half the team described the situation of 42 aiga or households as dire.  Ten aiga had no homes and all were in need of clothing.  Access for the visitors was difficult because of the accumulation of mud and debris.