On the second anniversary of the collapse of the Rana Plaza, 24 April, CWS stands with our partners the National Garment Workers Federation of Bangladesh.  Today they will organise another human chain made up of clothing workers and families who lost loved ones, were injured or traumatised in this disaster that claimed 1,133 lives.  In other parts of the world, activists are organising protests outside Benetton and other shops demanding they contribute to the fund to fully compensate the workers.  They are asking companies that do business in Bangladesh to signthe Bangladesh Fire and Building Safety Accord.  Find out what companies need to pay up.

CWS supports the rights of workers and their families for full compensation.  The people who make our clothes must be paid fairly and work in safe conditions.  Find out more about the clean clothes campaign and Fashion Revolution Day.  Human Rights Watch released a new report on the anniversary, Whoever Raises their Head, Suffers the Most: Workers’ Rights in Bangladesh’s Garment Factories.  Support Bangaldeshi workers to campaign for their rights.  Donate Now,

One year on from the collapse of Bangladesh’s Rana Plaza, Bangladeshi garment workers and their families are waiting for justice.  Only a few of the companies whose clothes were manufactured in the factories have paid compensation.  Families have been left destitute and workers are demanding better conditions and wages.  A few of the dangerous buildings have been temporarily closed but most have continued production.  Bangladeshi workers do not want a boycott, but support in their campaign for a Living Wage.  Read One Year On released by CWS on April 24, 2014, to find out how you can help. 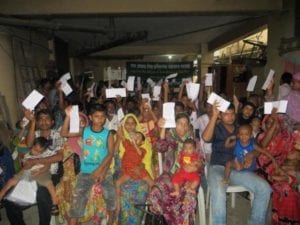 On 29 June 2013, the National Garment Workers Federation hosted 67 children who lost their parents in the Rana Plaza collapse (see below).  The children were each given a grant of 2500/- (equivalent to NZD$40.28) by the union and provided with food and transport to the event.  The children were also present for a press conference on the International Day of Action to End Death Traps.

In the press conference the NGWF noted the growing concern of consumers from developed countries about goods made in unsafe factories and unfair working conditions.  In a country with 5,000 garment factories, the safety of 3.6 million people (85% of whom are women) employed in the sector is critical to the Bangladeshi economy.  The sector earns 79% of the country’s export earnings.  The meeting noted more than 60 transnational companies had signed on to the Accord on Fire and Building Safety in Bangladesh which has union, NGO and retail involvement.

The legally binding accord signed in April 2013 involves an initial inspection of all factories involved for grave hazards and the identification of needed repairs.  This will take place within 9 months and an interim procedure has been agreed to deal with urgent remediation measures.  A Chief Safety inspector and executive director will be hired and a governance structure set up in Bangladesh.   At the press conference the NGWF asked, “How many more children will be left parentless because of unsafe workplaces?”

On July 10 another corporate safety plan for factory workers backed by the GAP and Walmart was launched.  It was widely criticised by unions and other groups involved in the sector for not involving workers in governance, the fact that it was not legally binding and did not fund Bangladesh to upgrade its factories.

Lend your support to the Bangladesh workers in their campaign for safer workplaces.  Donate now.

Lend your support to the Bangladesh workers.  Donate now.

Christian World Service has been asked for help by the Bangladesh union that represents many of the garment workers in the recent horrific building collapse in Savar, Bangladesh.  Over 1100 people died when the eight storey Rana Plaza building in Savar, near the capital Dhaka collapsed on 24 April.  The disaster triggered international outrage about Bangladeshi factory working conditions.

The request to CWS for support comes from Amirul Haque Amin of the Bangladesh National Garment Workers Federation (NGWF).
Mr Amin wrote to explain that the next step for NGWF is to try and get justice for the survivors of the dead, for the injured and the workers who are now jobless after the building collapse.  They needed financial help to ensure the dead, injured and now jobless workers all get compensation, that the injured get proper medical help and that the campaign for safer working conditions is carried on.  “If we can get some direct support for this it then gets easier for us to do other things as well”, Mr Amin wrote.

One of the “other things” is to try and get support for the workers in the 22 other factories that had been closed down by the Bangladesh Government in response to international condemnation about working conditions. The Government has also rushed through measures to reassure critics, including raising the minimum wage and making it easier for workers to form unions. Hundreds of other unsafe factory sites have been closed down by worker unrest since the building collapse.

In the wake of the disaster there has also been a global outbreak of soul searching in developed nations about the high moral price attached to cheap garments produced by exploited workers.  Bangladesh is the second largest producer of export garments after China and in the decades CWS has been supporting the Bangladesh National Garment Workers Federation improving conditions has been hard. Most of their exports go to European consumers.

An engineer had been called to the building by the owner the day before the collapse after cracks had appeared in concrete pillars. Despite his warning that the building was unsafe thousands of mainly female workers were still sent into the upper floor factories for the next morning shift.  They were there when the building finally failed and collapsed. It is a story that holds few surprises for the Bangladesh National Garment Workers Federation.

Last year on December 27 they held their annual “Garment Workers Safety Day “demonstration for better health and safety laws, and union recognition outside the National Press Club in Dhaka. This event is held in memory of the 27 garment workers killed in a factory fire on December 27 1990. From then till November 2012 a total of 566 garment workers had died in 55 major factory fires. Another 64 workers had died in another factory collapse while the total of serious injuries in these industrial disasters since 1990 is 3,610.

WCC expresses concern and solidarity for Bangladesh.  The general secretary wrote in sympathy for those affected by the garment factory collapse and regarding increasing attacks against religious minorities.