On September 28, a 7.4 magnitude earthquake followed by a tsunami caused widespread damage on Indonesia’s Central Sulawesi.  Palu was the worst affected area.

CWS is asking for donations to assist with shelter, safe drinking water, sanitation, and medical care.  ACT Alliance Indonesia members are coordinating their work with government and other agencies.  People will need help for the months ahead. 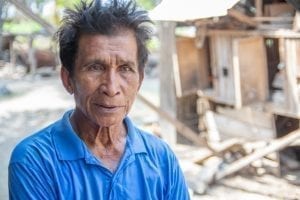 “There was a rumbling sound, and then an explosion. I looked up and a tsunami wave was towering over my small fishing boat,” said Mr. Mushki, a 57 year-old fisherman from Pantoloan village near Palu, Indonesia. “The wave picked up my boat and tossed it in the air, then it landed back on the water, with me still inside. I blacked out. I’m lucky,” Mr. Mushki concluded, “I survived.  And so did my family.”

ACT Alliance Indonesia medical staff treated Mr Mushki for his injuries.  His family was safe but he lost his boat and home in the disaster.

The double disaster claimed the lives of 4,340 people according to the Governor, Longki Djanggola.  He further reported 39,191 homes damaged and 3,673 destroyed.  Four months later, survivors remain in shelters awaiting transitional or permanent shelter.  Residents in the shelter say distribution of supplies and the lack of water are a source of conflict. 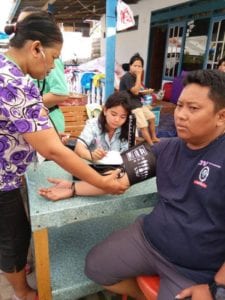 They have worked hard to maintain vital services like healthcare, water and sanitation. Every day, one member distributes 218,000 litres of water using 10 tankers which meets the minimum emergency standard of 15 litres a day. By the end of December, 16 four stall public latrines had been completed with nine more under construction.

Picture: Day 1 – Medical staff examine first patients on the grounds of the Grand Mosque, Palu. The first medical team arrived in Palu on October 1 after queuing for 7 hours to enter the city.  The team consists of 2 doctors, 1 midwife, 1 psychosocial specialist, and 5 volunteers.  They distributed tarps, bottles of water, and instant noodles as well as referring some of the injured to the hospital for treatment on day 1.  Credit: YEU

Please support the Indonesia Earthquake Tsunami Appeal so we can get help to the survivors.  Donations will be matched by the New Zealand aid programme.

Your donation will support local ACT Alliance Indonesia members to provide food, water, medical care, and other support to earthquake and tsunami survivors.  They will be matched by a grant from the NZ Government.

Give them a hand!